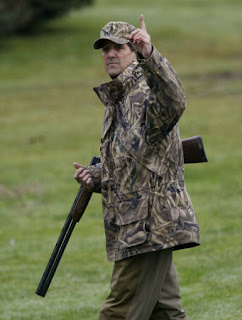 Hillary Goes Hunting
“I’ve hunted. My father taught me how to hunt. I went duck hunting in Arkansas. I remember standing in that cold water, so cold, at first light. I was with a bunch of my friends, all men. The sun’s up, the ducks are flying and they are playing a trick on me. They said, ‘we’re not going to shoot, you shoot.’ They wanted to embarrass me. The pressure was on. So I shot, and I shot a banded duck and they were surprised as I was." - Hillary Clinton

Remember John Kerry, all dolled up like Elmer Fudd? Conventional wisdom said that Al Gore lost the votes of white men because he was against gun control. Kerry decided that getting dressed up in camouflage would help his case. It didn't.
If we see Hillary out hunting wabbits, we will know that it is official. She is done.
Posted by Freedom Rider at 9:56:00 PM