“Black people gamble. Black people smoke. Black people drink. And so if these companies want to take some of the money they’ve earned off of our people and give it to us to support good causes, then we take it.” - Elsie Scott, Congressional Black Caucus Foundation

Not a pretty picture. Our colored representatives sell themselves cheaply for the sake of good parties. They get to stay in office and throw fabulous soirees while they do it. My people, my people.
Posted by Freedom Rider at 8:57:00 PM

You can get away with a lot if you're both white and an Ivy Leaguer. Amy Bishop, the killer professor at the University of Alabama at Huntsville is an excellent example of this phenomenon.

Twenty-four years ago, Bishop shot and killed her brother and somehow managed not to be charged with a crime. I'm guessing that mom and dad are wealthy and or well connected. Stay tuned. It also turns out that the then District Attorney was William Delahunt, now a member of congress. Delahunt now says he remembers nothing about the case. Selective amnesia can be very useful.

Some years back two white men committed armed robberies in New York and shot people in the process. They were dubbed the "gentlemen bandits." Bishop kills three and is described as "Harvard educated." Being white never hurt anybody.

I'm sure there is a lot more to this sordid tale.
Posted by Freedom Rider at 4:41:00 PM

Our constitutional rights benefit anyone in this country, citizen or not. You wouldn't know it because Newt Gingrich and other republicans claim that those rights apply only to U.S. citizens. That assertion is a lie.

Huffington Post makes a big deal about Gingrich falsely stating that "shoe bomber" Richard Reid is an American citizen and was therefore entitled to his rights against self-incrimination. Reid is a citizen of the U.K., but outrage shouldn't be directed at Gingrich only because he told a bald faced lie about Reid's nation of origin.

I have had my issues with Salon's Glenn Greenwald, but he is an attorney and he makes the best case I have heard so far against the GOP's most recent attempt to keep the nation stupid.

"The Boumediene Court held that it was unconstitutional for the Military Commissions Act to deny habeas corpus rights to Guantanamo detainees, none of whom was an American citizen (indeed, the detainees were all foreign nationals outside of the U.S.). If the Constitution applied only to U.S. citizens, that decision would obviously be impossible. What's more, although the decision was 5-4, none of the 9 Justices -- and, indeed, not even the Bush administration -- argued that the Constitution applies only to American citizens. "

"...to see how false this notion is that the Constitution only applies to U.S. citizens, one need do nothing more than read the Bill of Rights. It says nothing about 'citizens.' To the contrary, many of the provisions are simply restrictions on what the Government is permitted to do ('Congress shall make no law respecting an establishment of religion . . . or abridging the freedom of speech'; 'No soldier shall, in time of peace be quartered in any house, without the consent of the owner'). And where rights are expressly vested, they are pointedly not vested in 'citizens,' but rather in 'persons' or 'the accused' ('No person shall . . . . be deprived of life, liberty, or property, without due process of law'; 'In all criminal prosecutions, the accused shall enjoy the right to a speedy and public trial, by an impartial jury of the state and district wherein the crime shall have been committed . . . . and to have the assistance of counsel for his defense').

So there you have it. The underwear bomber and the shoe bomber had the right to remain silent. Republican demagogery on the subject is just that.
Posted by Freedom Rider at 8:01:00 AM 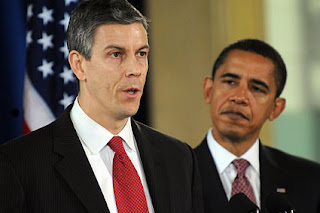 "Obama Plots Against Children" or so a sensationalist writer claimed. That writer would be yours truly actually. My column written last September chronicled the horrors visited upon public education by the current Education Secretary, Arne Duncan. He brazenly brags about the corporate take over of public education he oversaw in Chicago.
"I am not a manager of 600 schools. I'm a portfolio manager of 600 schools and I'm trying to improve the portfolio.” I didn't know public schools were corporations, but what do I know?
Obama's basketball buddy let his true colors show in a recent interview. "I’ve spent a lot of time in New Orleans and this is a tough thing to say but I’m going to be really honest. The best thing that happened to the education system in New Orleans was Hurricane Katrina. That education system was a disaster."
Now I don't know anything about NOLA public schools prior to Katrina, but I do know that a natural disaster which displaced thousands of people wasn't good for anything or anyone. On second thought, I have to take that back. The hurricane cleared much of the poor black population out of New Orleans and what better way to start a school system or any other system from scratch if there are no pesky colored people asking questions or horror of horrors, making demands.
Duncan is like Barbara Bush, who opined that "under privileged" black people were actually doing quite well living in shelters after they lost their homes. Duncan may not be as crass as Pat Robertson who asserted that the Haitians brought an earthquake upon themselves by practicing devil worship. He has a little more sophistication than that, but not much. He too thinks that black people are well served by disasters which allow white people to take over.
If Duncan's boss were a white republican, black people would demand an apology. But his boss is Obama and we know what that means. He gets away with things that a white guy couldn't. So we will have to look at the shameful Duncan for as long as Obama wants him to stay in his job.
Duncan is a human disaster and the best thing that could happen to children all over this country would be to have an Education Secretary who truly cares for them. Lots of luck kids. You are stuck with Obama and Duncan too.
Posted by Freedom Rider at 9:41:00 PM