"We don't know why on this trip that he [Obama] is on the United States now why he is not in any black communities."
Give him hell Maxine!

Does Obama Believe in Global Warming?

"Global warming caused by burning fossil fuels is melting the Arctic's ice. The melting of that ice makes it possible to exploit the region's reserves of fossil fuels, which will contribute even more to warming of the Earth's temperature.

And, remember, we will be trashing the Arctic for, at best, three years worth of oil."
Randolph Holhut

Liberal snootiness and snobbery is really and truly making me sick. These people care nothing about issues or ideology and will run like sclalded dogs rather than wage a political fight against the ruling classes. It makes sense I suppose. They don't call them rulers for nothing.

This week republican presidential candidate John Huntsman made news because he says that global warming is a fact. His rivals, most prominently Texas governor Rick Perry, say that it is unproven theory.

Progressives watch and laugh and stick their noses high in the air. They have yet another chance to proclaim their intellectual and moral superiority over conservatives.

Of course, this would have been a perfect week to point out that president Obama, just like Rick Perry, could give a rat's backside about global warming. The U.S. Bureau of Ocean Energy Management has given preliminary approval for Royal Dutch Shell to begin drilling in the Alaskan arctic next year. Yes, I know, the EPA and Fish and Wildlife and heaven only knows who else must also agree. But seriously, do you really think that one agency said yes without knowing what the boss, Obama, wants the rest of them to do?

Are memories so short that the BP disaster in the gulf last year has been forgotten already? It took BP five months to figure out how to resolve the Deep Water Horizon disaster and the gulf is still paying the price.

Obviously every living creature on earth is paying the price for global warming. More fossil fuel accelerates the dangers and drilling in the arctic ocean is needlessly dangerous. But never mind. Perry is an ignoramous and Michelle Bachmann is stupid, so we need an ivy league smarty pants to send us on the road to hell. We'll feel better knowing that a constitutional law professor sent us there.

The New York Times published a photo of a starving Somalian child in today's edition of that newspaper. As expected, the photo has elicited comment and deep emotion, as it should. Unfortunately, the Times headline states that the Shabab, Somalia's resistance group, is responsible for the starvation. What a difference one year makes. In February 2010 the Times said the following. "U.N. Officials Assail U.S. On Limiting Somali Aid ."

It is the United States which instigated Ethiopia's invasion of Somalia, destroying that country and killing thousands of people. Black Agenda Report has done great reporting on how the U.S. and Ethiopia are deliberately starving Somalians. Chris Floyd has also reported a story which has largely been ignored.

Don't believe anything our government says about its actions abroad. As in all other ways, the Obama administration continues the very worst policies of the Bush regime, and killing Somalians is no exception.
Posted by Freedom Rider at 10:06:00 PM 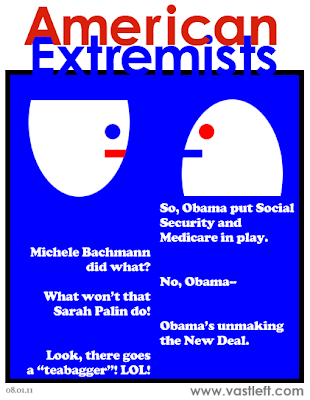 Quote of the Week

"The Tea Party held America hostage during "the debt debate"? No, you fool, you idiot; fucking rich people did it. The Tea Party is just some shit they cooked up to keep you busy, to keep you fuming at each other while they steal your tooth fairy money and grandma's dentures. Every policy that you abhor and mistakenly ascribe to the ersatz conservative revanchism of the so-called tea-party movement is a willful policy of oligarchic centralism with the end goal of extracting every last red cent from every last human being on the earth.

Yea verily, I have returned unto you to put it straight to yinz: there is no tea party; there are no Democrats; there is no America. There is only global capital. There is no keeping American competitive for the future against the Chinese children of the math-science learning gap to win tomorrow today with the power of innovation. There is a single transnational elite whose allegiance is to itself. They would've fucked you on Saturday; they'll fuck you next Wednesday instead. There was no debt crisis. THERE IS NO DEBT CEILING. You are like prisoners in a concentration camp, tearing each other apart over crusts of bread. The guards check their rifles. The kommandant shtups his mistress. The carrion birds circle against the concrete sky.