AFRICOM is the Question

That is the title of my latest Black Agenda Report column. The back and forth about what Donald Trump said to Sgt. La David Johnson's widow should not be the central issue. Congresswoman Frederica Wilson and the rest of the Congressional Black Caucus have an opportunity to raise the issue of U.S. imperialism directed against African countries. But as I have pointed out they are among the worst democratic party hacks. We'll get no useful information or leadership from them.

Read my column here and listen to my conversation with Don DeBar here.
Posted by Freedom Rider at 11:31:00 AM

The Coalition Against U.S. Foreign Military Bases will hold a conference in Baltimore, Maryland January 12 - 14, 2018. You can see registration and other event information here. I'll have more to say as the event approaches. And I will be among the speakers. 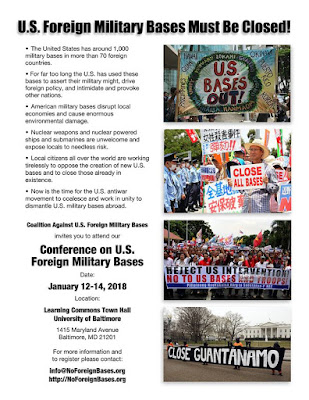 I haven't been on Don Debar's CPR News program for a few months. Today I was back to talk about my latest Black Agenda Report column, Russiagate Brings Black Caucus to a New Low. While you're reading BAR also check out Glen Ford's column House (of Representatives) Negroes Rally Against Russia. The Congressional Black Caucus (CBC) deserves a double beat down this week. They are a great danger to black people.

Listen to my conversation with Don here.
Posted by Freedom Rider at 8:30:00 PM

Yesterday I joined this rally in New York City along with one hundred other people. It was one of many that took place across the country to protest the 16th year of the American occupation of Afghanistan. I represented both Black Agenda Report and the Black Alliance for Peace as I made my remarks. I start at about 37 minutes into the program.

You'll notice that there is footage from the Korean parade interspersed. Their event was ending as ours began. Enjoy that slice of New York City life too.
Posted by Freedom Rider at 9:03:00 PM

Margaret Kimberley on White Supremacy, the Duopoly, BLM, US Imperialism

I had a great time discussing a wide range of issues with Trish Roberts on her show The Naked Empire. Thanks to Real Progressives for the Facebook Live access.
Posted by Freedom Rider at 7:28:00 AM

I appeared on Presstv to discuss the March for Racial Justice which was held in Washington DC. Unfortunately my remarks were edited, a lot. I only spoke for about 3 minutes and they only used a snippet. Oh well.

There was controversy about the march taking place on Yom Kippur but organizers chose the date of September 30 for a very good reason. On September 30, 1919 a massacre of black farmers took place in Elaine, Arkansas. An estimated 100 to 200 people were killed after they attempted to protest against the sharecropper system by forming a union.
Posted by Freedom Rider at 8:34:00 AM