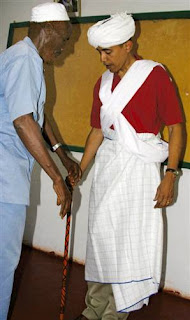 Drudge Out to Get Hillary
" 'On Nov. 25, Drudge floated the rumor she was having a lesbian affair with an aide over the teasing headline, 'Don't Go There.'
On Dec. 17, as doubts about her ability to win Iowa grew, he led the site with an unflattering but attention-grabbing photo of Clinton looking tired and haggard. The headline: 'The Toll of a Campaign.'
Now each day features stories of Clinton campaign turmoil competing with those of Obama's surging popularity.
ADIÓS: HILLARY'S TOP LATINA SIDELINED... was the Feb. 11 headline, when Clinton's campaign manager left her post.
OBAMA WINS NEBRASKA; WASHINGTON; LOUISIANA; MAINE... EVEN WINS ... A GRAMMY!
Ties Clinton to Past... read items below.' " - Drudge Rep0rt
Who in Hillary Clinton's campaign would be dumb enough to circulate photos of Obama in Kenyan garb and give them to Matt Drudge of all people? I can't imagine a staffer, an intern, a volunteer, or a janitor being stupid enough to cast Hillary as the villain vs. the saintly Obama. Matt Drudge claims a Clinton staffer sent him the photos, but that assertion should be taken with a grain of salt at the very least.
As I pointed out in a post last week, the right wing press, Drudge included, have turned against her with a vengeance. She and her husband tried to be slick, but ended up being shafted, after they wooed Rupert Murdoch and Matt Drudge. There is no honor among gangsters, so Hillary's ham handedness turned fair weather friends into avowed enemies.
So there is some poetic justice for her in this episode, but the idea that she would make herself look like the bad guy, and spend crucial time talking about Obama instead of herself, is just ludicrous. Hillary Clinton was scheduled to give a major foreign policy address today, and she and Obama will debate tonight. This would not be a good time to fend off accusations of dirty campaign tactics. Conversely, the timing is perfect for Matt Drudge. Consider the source.
Posted by Freedom Rider at 9:45:00 AM