Hallelujah! You better get saved. We are living in the end times, the financial end times that is. Don't shop this Friday, November 23rd. Just say no to temptation.

How can you be saved? It is easy. Just join the Church of Stop Shopping.

"The Democrats have proven themselves to be entirely worthless. They will not stop or even significantly slow down the Bush administration on any issue that matters. If you still believe that voting for Democrats is an infinitesimal hedge against encroaching disaster, I offer my genuine sympathies. "
Arthur Silber, Power of Narrative, October 2006

I recently discovered the Power of Narrative, which is now one of my favorite blogs. Silber is often accused of spreading "doom and gloom." Well so what. The situation is gloomy and he always hits the nail on the head. Most of the anger directed towards him is the result of his all too correct assessment that the Democrats and Republicans are partners in crime. They all promote empire, war, racism and corporatism. The differences between them are diminishing more and more over time.

Enter Exhibit A, Congresswoman Jane Harman, Democrat of California. She recently sponsored HR 1955, the "Violent Radicalization and Homegrown Terrorism Prevention Act," which passed the House by a vote of 400 to 6. Qu'est-ce que c'est Homegrown Terror? Even the name is absurd and stupid. Homegrown? Sounds like peaches ready to be canned. It is tempting to laugh but this isn't the least bit funny.

I can think of instances of homegrown terrorism, such as murder threats against abortion doctors, or hate speech emanating from the KKK. Somehow I don't think that is what Harman and her colleagues had in mind. The racist right wing, Republicans and Democrats, have tried to convince us that there are fifth column "Islamofascists" hiding under every bed and they are inspired by, are you ready, the internet.

"The Internet has aided in facilitating violent radicalization, ideologically based violence, and the homegrown terrorism process in the United States by providing access to broad and constant streams of terrorist-related propaganda to United States citizens." Sounds spooky. Too bad it is all a load of crap.

H.R. 1955 calls for the formation of a commission that will investigate the extent of and no doubt find proof of Muslim and Arab terrorists on every block. But like the ginsu knife there is always more.

Center of Excellence? Harman must have held a seance and asked Orwell for the worst name imaginable. Then again, perhaps it is the best name. This is fascism, pure and simple.

Under the guise of keeping us safe from non-existent threats, our freedoms will be taken away. Dissent of all kind, including non-violent activism, will be criminalized.

Big brother is watching and he is a Democrat.
Posted by Freedom Rider at 8:08:00 PM


"...don’t you think they’re going to get at the very least tazed or beaten to a pulp by somebody?" 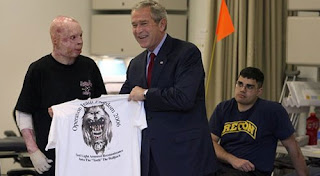 "Of course, many Americans -- including most notably our leading politicians -- couldn't care less about truly honoring those whose guts have been ripped out, whose limbs have been bloodily and painfully mutilated, whose minds have been destroyed. For the state and its enablers, the war dead are props used to purify and sanctify the ongoing and future campaigns of slaughter, in an endless procession of slaughters throughout history."

Lance Cpl. Isaac Gallegos is still alive, but Arthur Silber's comments still hold true in his case. What does Bush say when he meets maimed vets like Gallegos? "Sorry about your face." No, he doesn't say that. He says he appreciates their service, God bless, America loves you, keep fighting terror, blah blah and blah.

The Bushies surely screen and make sure that anyone meeting Dubya loves him, especially wounded vets who are liable to ask hard questions.

When I see Gallegos and others like him, young men who will never look normal again, I wonder what they think about. It must be too hard to admit that you are a chump who now looks like a character in a zombie movie, all because you were used by people who would never allow their children to be put at such awful risk.

Please look at all of these photos and remember that there are Iraqis who have suffered even more. Thanks to Uncle Sam, their medical system has been destroyed. They don't get medical care and when they are wounded as badly as Gallegos they usually die or they live but look even worse.

"There are some who claim that torture is a nonissue because it never works--it only produces false information. This is simply not true, as evidenced by the many decent members of the French Resistance who, under Nazi torture, disclosed the locations of their closest friends and relatives. " - Alan Dershowitz

Spain's King Juan Carlos had a royal hissy fit today in Santiago, Chile. During the closing session of the Ibero-American Summit, Venezuelan President Hugo Chavez repeatedly called Spain's former Prime Minister, Jose Maria Aznar, a "fascist." In 2003 Aznar joined Tony Blair as Europe's top lap dogs, otherwise known as the coalition of the willing. Along with Bush they bear responsibility for the deaths of one million Iraqis. Thank goodness Chavez has not forgotten and is unafraid to bring a skunk to the party.

El Rey was having none of it. After Prime Minister Zapatero tried diplomatically to shut Chavez up, Juan Carlos blurted out, "Why don't you shut up!" Poor King. He isn't used to plain speaking, but Chavez was in the house. (You can see the video in Spanish here.)

Aznar not only helped kill Iraqis but he also posthumously honored Meliton Manzanas, who was one of Franco's chief enforcers. According to Amnesty International "Melitón Manzanas had been responsible for the torture of hundreds of Basques during the rule of General Franco." Looks like Chavez hit the nail on the head and caused the royal nose to come out of joint.

"All the documentation I mentioned above was available to Baisden and the show's producers. They had the paper trail and other family members tried to talk to them and dispute the claims. They knew Jena-Gate was a lie when they let Jones on the air this week. But they simply didn't care. " Andre Banks, Write What I Like

"[Baisden] declined to specify how much was collected or how the money was distributed."
Chicago Tribune

Love, Lust and Lies is the name of Michael Baisden's God-awful syndicated radio show. Every day Baisden makes idiotic remarks about male/female relationships and entices otherwise innocent but attention seeking people to call in and expose their own stupidity. I have only listened to Baisden when I have been forced to do so, that is to say when I have been a captive audience of one of his fans.

The rightness of my reaction was confirmed this week when Marcus Jones, father of Jena 6 defendant Mychal Bell, attacked Color of Change on Baisden's show. Color of Change was one of the first organizations, on the net or off, to bring world wide attention to the Jena 6 case. Color of Change has an authorization signed by all six families, Jones included, to raise funds for attorney fees. Color of Change has also produced the invoices and cancelled checks to prove that their efforts are on the up and up. They have raised $212,000 and disbursed $210,000 to the lawyers, all with the permission of Jones and the other families.

Mychal Bell is still behind bars because of a drug related arrest made prior to the Jena 6 arrest. I point that out to instill some sense of compassion for his father, who may be the user or the usee in this mess, the degree of blame that should be directed at him is unclear.

Color of Change provided Baisden with the relevant documentation before his broadcast, so he isn't being honest when he now claims that Marcus Jones is responsible for the lies told on his show. Yes, Baisden immediately threw Jones under the bus when Color of Change proved the charges to be false. There is no honor among the dishonorable.

It is difficult to know where to begin with this mini scandal. Initially Baisden claimed that all six families signed a letter asking Color of Change to stop raising money. When two of those families denied having signed such a letter, Baisden then claimed it was signed by four of the six. To make matters even more interesting, some of the signatories say the letter they signed didn't even mention Color of Change. Baisden has declined to produce said letter. Why am I not surprised?

Baisden wrote a lame letter of quasi apology but has not given a full explanation on the air, the only apology that would count for anything. He should also give Color of Change an opportunity to speak on his show and address his charges.

That won't happen. Baisden is nothing but a snake in the grass. He has announced plans to raise $1 million of his own. I hope he does so, and I hope that the money pays for legal fees and for some compensation to the families for their ordeal. I also hope that he leaves a paper trail, like Color of Change. I'm not inclined to hold my breath.
Posted by Freedom Rider at 11:18:00 AM

Alternet and Dissident Voice have once again posted my Black Agenda Report column on the gangster Rudy Giuliani. Thanks to them for the support.

Giuliani's former police commissioner, Bernard Kerik, was indicted yesterday. Indicted for what you may be wondering. Nothing much, just two counts of bribery, tax fraud and making false statements. By the way, Giuliani appointed Kerik police commissioner after being informed that Kerik had taken cash from a mob connected construction company. Nice.

Did you know that Kerik was also deported from Saudi Arabia? Did you know that he harassed employees of the New York City Department of Corrections who crossed his then girlfriend, or who wouldn't work for the Giuliani campaign?

So much scandal so little time, unless you are the national corporate media. Members of that august group ought to make the Giuliani/Kerik connection a continuing front page article throughout the campaign season. Oh sorry. I forgot. Only John Edwards hair is worthy of national press attention.
Posted by Freedom Rider at 8:42:00 AM