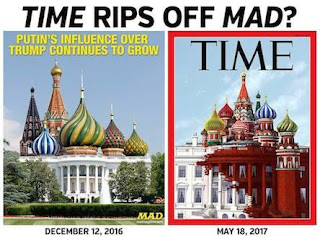 We have surely fallen down into the rabbit hole. What was satire a few months ago now passes for serious news coverage. Such is the state of affairs as propaganda goes into overdrive. Endless Propaganda is the subject of my latest Black Agenda Report column and topic of my weekly conversation with Don DeBar.


I had a great conversation with Eleanor Goldfield about a variety of issues. We concluded that there is a lot less confusion (debates about white allies, political correctness, democratic party deceptions, black misleadership class) when we adhere to left wing principles. So simple. A good use of 21 minutes of your time.
Posted by Freedom Rider at 5:58:00 PM 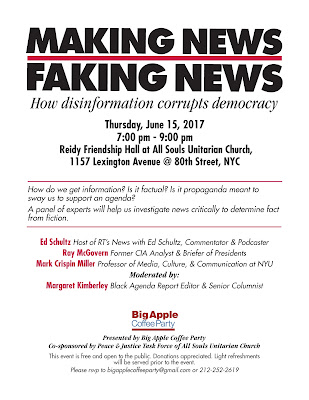 I'm very exciting about moderating this panel. Ed Schultz, Ray McGovern and Mark Crispin Miller will discuss the hot topic of fake news. The event is free but contributions are welcome. If you are in New York City on June 15th please attend. It should be an interesting evening.
Posted by Freedom Rider at 8:45:00 PM

I spoke to Glen Ford on Black Agenda Report radio about my column Democratic Party Death Spiral. Why do they keep losing? Because they have been bought off my banksters and other corporate interests.
Posted by Freedom Rider at 8:35:00 PM

I was invited to speak on the issue of redistricting and race discrimination. I appreciate being invited on Presstv again.
Posted by Freedom Rider at 8:15:00 PM

Black Agenda Report and CPR News: No Tears for the FBI

The sorry spectacle goes on and on. Progressives are attacking Trump from the right when they defend the FBI and the other intelligence agencies that are in the business of crushing human rights. That is their reason for being after all. James Comey denied the existence of mass incarceration but so-called leftists get their pants in a twist because he is now out of work.

Getting votes into rocket science. Political parties win if they give people what they want. Simple. Better wages, education and health care as rights, an end to the incarceration state. But if democrats campaign on these issues they will fall out of favor with their corporate patrons. So they don't give people what they want and as a result they are wiped out at every level of government across the country.

Read my column in Black Agenda Report and listen to my conversation with Don DeBar.
Posted by Freedom Rider at 9:47:00 PM 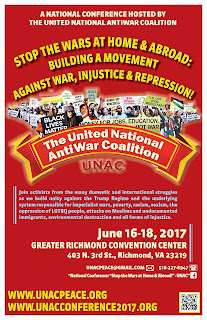 "We need to come together in an action-oriented conference where we can meet each other, learn from each other, support each other, strategize together and leave with a coherent plan for united, effective action."

The United National Antiwar Coalition (UNAC) conference will be held in Richmond, Virginia on June 16 through 18. I serve on UNAC's Administrative Committee and I can proudly say that we did not fold our tents the way others did when Obama neutralized so many progressives and would be leftists.

Check out the conference website. I'll be there of course along with Glen Ford, Ajamu Baraka, Kevin Zeese, David Swanson, Ann Wright, Jaribu Hill, Lawrence Hamm, Medea Benjamin and the entire UNAC team of activists from around the world.

UNAC is a founding member of the Hands Off Syria Coalition and Odessa Solidarity Campaign. We have marched with Mississippi auto workers and against NATO aggression. We have publicly supported Rev. Edward Pinkney, Rasmea Odeh and other political prisoners.

You should be in Richmond, Virginia with UNAC. You should register today.

Stop the wars at home and abroad!
Posted by Freedom Rider at 8:16:00 AM

Obama will get paid. $400,000 to be exact. The patron of this particular largesse is investment bank Cantor Fitzgerald. Of course it won't be the last time the capitalist's factotum will be compensated. You can't build presidential libraries with hope and change. Speaking of change, $400k is chump change compared to what Obama will be paid in the future.

The announcement of the big payday sent naive Obamabots into a collective tizzy. Wasn't Obama supposed to be different? Well he isn't different and that is pretty obvious to anyone who was really paying attention. In 2008 he raised more money from wall street than any previous presidential candidate in history. And he didn't forget who the bosses are because the crooked banksters were bailed out and none of them went to jail.

Should we be upset? Yes. We should be upset that our system is so corrupt and that we live under billionaire rule. I explained in my Black Agenda Report column this week and discussed it with Don DeBar. You can read the column here and listen to Don and I here.

Two days ago I had another great conversation with Craig Gordon of Now Age Press. We talked about "binary social conditioning, and how the dynamic is undermining American society.

Binary social conditioning? You know how it works. Republicans are evil, true, but binary thinking concludes that democrats are not evil and cannot be questioned. That part is not true and exemplifies what is wrong with politics. Paradoxically it also explains why the democrats are wiped out across the country.

Listening to our talk will be the best use of 36 minutes that you'll have all week. For real.

The United States and Our Russian Obsession

I have written a lot about this subject. Russia is the last bastion of opposition to American plans for global hegemony. That country has been used as a scapegoat to cover up the debacle which led to Hillary Clinton losing to Donald Trump and to prevent democrats from turning against their inept and corrupt party leadership. I wrote this and more in an email interview with Daniel Falcone. It appeared in Atlanta Blackstar. You can read all about it here.
Posted by Freedom Rider at 10:55:00 PM