I Am Not Middle Class

"They call it the American dream because you have to be asleep to believe it." - George Carlin

In today's Room for Debate in the New York Times, the topic of discussion was the middle class, or rather why so many Americans think that meaningless term applies to them. I readily admit that I don't know what "middle class" means. According to a Pew survey, nine people out of ten will describe themselves as middle class but no one has a solid definition.

I am a working person. I have a college degree and an income which outside of New York City, would give me some creature comforts. No matter. If I were unemployed I would be in big trouble financially.

I depend on employment. That makes me a worker. End of story. If more people called themselves workers, which they really are, they would be more politicized and less likely to be delusional about their status in this country.

So that explains it. Being middle class means never having to think about your situation. That would be too painful for the average American.
Posted by Freedom Rider at 9:06:00 PM 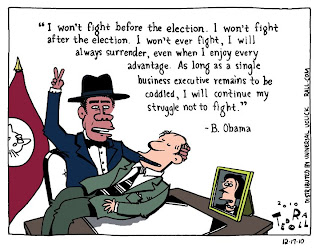 According to the New York Times, Barack Obama wants us to duck and cover. The administration wants us to: A. Be afraid of a terrorist nuclear attack and B. Stay inside when it happens. I have only three words: what the f*ck.

What are they hiding? What are they planning? What do they want us to support? No one knows exactly what they are planning, but I can guarantee that we are supposed to be in the mood for more war or for an increased attack on what is left of our civil liberties.

If I lived in Tehran I would be very afraid.

A Day That Will Live in Infamy

December 7, 2010 certainly sucked. Julian Assange is in jail, a federal judge rules that the president has the power to assassinate us at will, and our pompous ass president calls other people sanctimonious when they dare to speak out against his latest act of treachery.

"Tell a truth that discomforts power, that challenges its domination over our lives, our discourse, our very thoughts, and you will be destroyed."

Julian Assange has been brought down. Chris Floyd explains.
Posted by Freedom Rider at 8:00:00 PM

"If you need help, ask a Walmart manager for assistance."

The only terror threats come from the FBI using dumb dupes to concoct crimes. Gag me!
Posted by Freedom Rider at 8:33:00 PM

“Had I interfered in the manner which I admit, and which I admit has been fairly proved (for I admire the truthfulness and candor of the greater portion of the witnesses who have testified in this case)--had I so interfered in behalf of the rich, the powerful, the intelligent, the so-called great, or in behalf of any of their friends--either father, mother, brother, sister, wife, or children, or any of that class--and suffered and sacrificed what I have in this interference, it would have been all right; and every man in this court would have deemed it an act worthy of reward rather than punishment.

This court acknowledges, as I suppose, the validity of the law of God. I see a book kissed here which I suppose to be the Bible, or at least the New Testament. That teaches me that all things whatsoever I would that men should do to me, I should do even so to them. It teaches me, further, to "remember them that are in bonds, as bound with them." I endeavored to act up to that instruction. I say I am yet too young to understand that God is any respecter of persons. I believe that to have interfered as I have done--as I have always freely admitted I have done--in behalf of His despised poor was not wrong, but right. Now, if it is deemed necessary that I should forfeit my life for the furtherance of the ends of justice, and mingle my blood further with the blood of my children and with the blood of millions in this slave country whose rights are disregarded by wicked, cruel, and unjust enactments--I submit; so let it be done!”

In December 1860, South Carolina seceded from the United States of America, but in fact, the civil war began the previous year when John Brown attempted to apprehend weapons from the arsenal at Harpers Ferry.

Brown’s execution 151 years ago today is generally categorized as proof of his failure, but if anyone ever won by losing, it is John Brown. He didn’t succeed in physically freeing any slaves, but he sowed the seeds which caused the slave holding states to move towards leaving the union.
Neo-confederates are celebrating the beginning of the civil war, but they should not be the only group calling attention to these momentous events. Secession was the beginning of the end of slavery, which died when the confederacy was defeated militarily.

My next Black Agenda Report column will delve into this issue further, but black Americans should celebrate secession more than the sore loser white supremacists.

May John Brown rest in peace.
Posted by Freedom Rider at 3:40:00 PM