I was invited to speak at an anti-war event in New Brunswick, New Jersey on Sunday. Bob Witanek was kind enough to invite me. Madelyn Hoffman of New Jersey Peace Action was also a speaker.
Posted by Freedom Rider at 9:01:00 PM

Such is the title of my most recent Black Agenda Report column. We are headed to war because the criminal in chief has lots of help from the corporate media, feckless politicians and war mongering democrats.
Posted by Freedom Rider at 11:44:00 AM 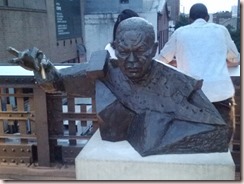 Two days ago I went to the High Line, a park located on what was once an old train line on the far west side of Manhattan. It is a lovely place surrounded by old and new architecture, beautiful views, plants, and works of art. One of those works is called Colin Powell and is part of an exhibit ironically called Busted. The bust shows Powell in that infamous moment at the UN when he used a vial as a prop and lied about the existence of WMD in Iraq. That is an important moment to remember as we are being told that there is incontrovertible proof of a chemical weapons attack in Syria.

The text description of the sculpture reads thusly:

“Goshka Macuga (b. 1967, Poland) presents Colin Powell, a sculpture of the former Secretary of State during his 2003 United Nations speech on weapons of mass destruction. The sculpture is inspired by the replica of Pablo Picasso’s Guernica, the anti-war painting which usually hangs in the assembly, but was covered during Powell’s speech.”

I didn’t know that the UN chose to spare the super sensitive secretary from seeing an anti-war statement. I had never heard of  Ms. Macuga until yesterday but now I am a fan.

You can see the sculpture until June 2014. It is located on the High Line near 22nd Street. Busted indeed.

British MP said what no American politician would say in the US Senate.

British MP George Galloway doesn’t play. In parliament this week he broke it down in the way that only he can about why the plan to start a war with Syria is so very evil.

I am reminded of his bravura performance back on May 17, 2005 when he sliced and diced senator Norm Coleman who accused him of profiting from the oil for food program. Coleman didn’t know that Galloway had already won a libel suit against a British newspaper regarding this very issue.

Not only did Galloway make it clear that he was innocent of the charges but he took the opportunity to give Coleman a piece of his mind about the whole corrupt enterprise.