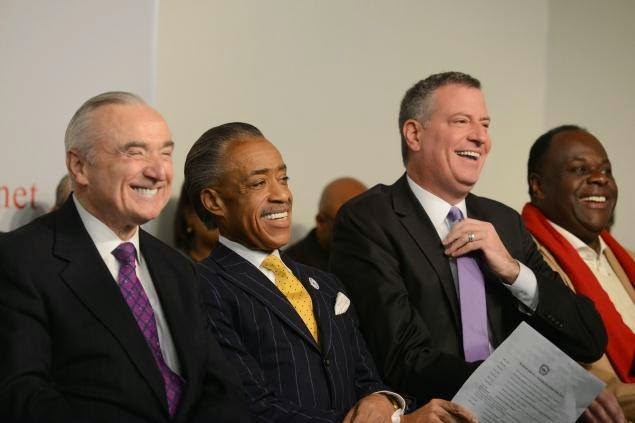 Yesterday a black man named Eric Garner was murdered via choke hold and suffocation in broad day light on a Staten Island, NY street by the NYPD. His killing is on video for the world to see.

Al Sharpton, King Rat, has taken over the faux protesting duties, comforting the family, etc. Just remember who he is. This photo was taken in December 2013. The newly appointed NYPD commissioner Bill Bratton, Sharpton and mayor de Blasio all at the house of hoodwinkosity, I mean house of justice.

Sharpton's job is to make it look like black people are protesting. His real job, for which he is well compensated, is working with the powerful to make sure that black people don't do anything of substance.

During Bloomberg's time in office Sharpton said nothing about stop and frisk. He wasn't going to bite the hand that fed him. Now Bloomberg is gone, Obama is a lame duck (his other hustle since 2009) so he slithered back to NYC and pretended to be an activist.

If you want to protest Garner's death, bypass Sharpton. He can't be trusted.
Posted by Freedom Rider at 2:44:00 PM

Black America and the Empire in Criisis