The "Resistance" Is Silent on Julian Assange

"This resistance is little more than a collective hissy fit from dead ender Democrats who insist on following a party that can’t even reliably stay in office. They have spent the last three years railing against Trump but bite their tongues when he commits an act that reeks of fascist ideology."

So sayeth yours truly in my latest column in Black Agenda Report. The so-called resistance is silent and won't speak for Julian Assange. Read my thoughts here.
Posted by Freedom Rider at 11:14:00 AM

#Unity4J 26.0 Online Vigil in support of Julian Assange and WikiLeaks

I joined the latest Unity4J 26.0 online vigil in support of Julian Assange. Even though Assange is now in custody it is still important to speak on his behalf.
Posted by Freedom Rider at 11:10:00 AM

#Unity4J 25.0 Online Vigil in support of Julian Assange and WikiLeaks

"I’m thoroughly disgusted with liberals who've been calling themselves the resistance, who've been calling Trump a fascist. And this is straight up, 100%, card carrying fascism, and you hear crickets. Or youhear criticism of Julian because he did this or because he did that or because he did this or that other thing. And now is their chance to speak up for the press. Trump gets into some stupid pissing match with Jim Acosta or whoever the hell about nothing. And here we have the rights of journalism being subverted completely by a man the liberal resistance claim to hate and they don’t say anything. Or what they do say is critical of Julian, the person who is the victim." - Yours Truly

On April 11, 2019 the Ecuadorean government violated its own laws and expelled Julian Assange from his place of asylum in the United Kingdom embassy. The UK government immediately took him into custody. The United States has indicted him and wants to bring him to the United States to stand trial.

The charges are in regard to the 2010 leak from Chelsea Manning to Wikileaks. The Collateral Murder video is among the documents that Manning provided. It clearly shows evidence of U.S. war crimes committed in the killing of one dozen Iraqi civilians.

I am very proud to have been invited to participate in the #Unity4J online vigils in support of Assange. This video was recorded on April 12th and includes Daniel Ellsberg and others. I didn't speak for very long, but you can see my comments at 2 hours 37 minutes, 2 hours and 54 minutes and 3 hours and 17 minutes.
Posted by Freedom Rider at 12:54:00 PM

What's Going on in Venezuela?


On April 9th I moderated a panel discussion on Venezuela. I was joined by Ajamu Baraka, Sara Flounders, William Camacaro, Danny Haiphong and Raymond Turner. The National Writer's Union hosted the event in New York City. Ajamu and Sara recently returned from Venezuela as part of a U.S. Peace Council delegation. William is a native Venezuelan and also discussed a recent visit.


Here I am speaking at the Black Alliance for Peace 2nd anniversary celebration which was held in Washington DC on April 4th. I spoke about how BAP fulfills the need for a black led, people centered anti-war movement.

The event also kicked off our domestic campaign which focuses on mass incarceration, ending police exchanges with Israel and the 1033 program which militarizes police departments across the country.  You can see all of panelists and learn about our 2nd anniversary activities in our newsletter here.

No Compromise! No Retreat!
Defeat the War Against African/Black People in the U.S. and Abroad!
Posted by Freedom Rider at 1:22:00 PM

If you only want to see me the folks at #Unity4J created this video of my participation in the latest online vigil in support of Julian Assange.
Posted by Freedom Rider at 8:30:00 AM

I am very proud to be included on this Antiwar.com list of those who have been “good on Russiagate.” That is to say it is a list of people who never fell for the hoax. Glen Ford, Bruce Dixon and the Black Agenda Report site are included too.

Julianna Forlano and I continued our weekly discussions. We talked about the importance of Martin Luther King's anti-Vietnam war speech on April 4, 1967 and Julianna played portions of the speech. We then talked about how to build progressive politics and whether that can be done within the confines of the democratic party. (I say it can't be done.) I start at about 15 minutes into the program. Listen here.
Posted by Freedom Rider at 9:26:00 PM

I continued my day with Garland Nixon on his WPFW program, News Views. We talked for an hour about Black Agenda Report, Black Alliance for Peace anniversary, #NotoNATO protests, Venezuela, Russiagate and the 2020 elections. 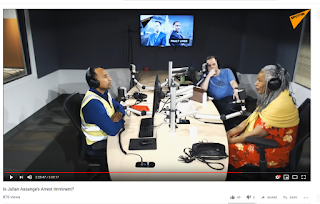 I made good use of my time in Washington. After my last appearance on Sputnik's Fault Lines I was invited to be in studio if I was ever in town. Well I was on Friday and appeared in-studio with Garland Nixon and Lee Stranahan. We talked about the anti-NATO protests, Venezuela, 2020 election. Listen here and here.
Posted by Freedom Rider at 9:18:00 PM

It isn't a coincidence that Black Alliance for Peace was founded on April 4, 2017. On April 4, 1967 Dr. Martin Luther King gave his famous speech, "Beyond Vietnam: A Time to Break the Silence," in which he condemned the Vietnam war. On April 4, 1968 he was assassinated because of his increasingly radical political stance.

When BAP and a coalition of peace groups learned that NATO planned to celebrate its 70th anniversary on April 4 we were inspired to protest that desecration and their wars of aggression around the world. A week of #No2NATO actions took place in Washington beginning on March 30th. You can see the BAP event on the video above.

No Compromise! No Retreat!
Posted by Freedom Rider at 8:58:00 PM

On April 4, 2019 Wikileaks reported a plan to eject Julian Assange from the Ecuadorean embassy in London where he was given asylum in 2012. That asylum was given to him by president Rafael Correa, who is no longer in office. His successor, Lenin Moreno, has cut a deal with the U.S. to turn Assange over in exchange for IMF aide.

Fortunately the publicity surrounding this story has resulted in the Ecuadoreans claiming that they have no such plans. The #Unity4J team once again organized an online vigil in support of Assange. Once again I was lucky enough to be invited to participate. You can see my interview which starts at about the 5 hour mark.
Posted by Freedom Rider at 8:04:00 PM