Rachel Maddow Creeps Us Out

Isn't Barack Obama wonderful! He is going to build hospitals in Pakistan. He ought to because the drones he sends there, the first within 48 hours of taking office, certainly maim enough people to warrant more hospital beds.

Well Rachel Maddow certainly thinks it is a very big deal. She starts this segment by comparing creepy code words like "homeland" and hackneyed phrases like "standing down when they stand up" that Obama shares with one George W. Bush.

But like a good little liberal she can't bare to follow through on the obvious conclusion that Obama is continuing every aspect of the Bush policy of military aggression. She even manages to wax enthusiastic because Obama shows up in public with his secretary of state. You see, he is different because he includes diplomatic niceties before he kills thousands of people, or whatever. See for yourself. Maddow and her fellow useless liberals will find a way to defend anything coming from Obama, including a future attack on Iran. Mark my words.
Posted by Freedom Rider at 3:03:00 PM

Only Beck could make Bill O'Reilly look like the voice of reason.

The Israel lobby always tells American presidents what to do. Eventually the Israeli prime minister will drag Obama off of stage and tell him what to do and they will brag about having done it. So what else is new?

"The libels on me and their easily traceable email trails show conclusively that there is a powerful lobby determined to prevent any view other than its own from being aired, still less to factor in American understanding of trends and events in the Middle East. The tactics of the Israel Lobby plumb the depths of dishonor and indecency and include character assassination, selective misquotation, the willful distortion of the record, the fabrication of falsehoods, and an utter disregard for the truth.

There is a special irony in having been accused of improper regard for the opinions of foreign governments and societies by a group so clearly intent on enforcing adherence to the policies of a foreign government - in this case, the government of Israel.

The outrageous agitation that followed the leak of my pending appointment will be seen by many to raise serious questions about whether the Obama administration will be able to make its own decisions about the Middle East and related issues. I regret that my willingness to serve the new administration has ended by casting doubt on its ability to consider, let alone decide what policies might best serve the interests of the United States rather than those of a Lobby intent on enforcing the will and interests of a foreign government."
Posted by Freedom Rider at 11:38:00 PM 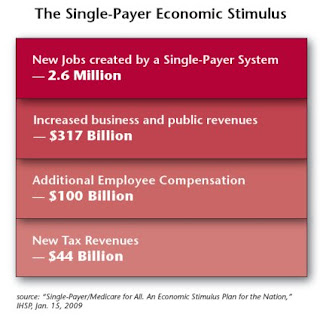 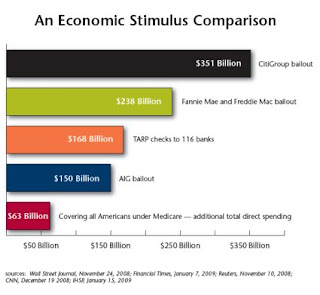 Single Payer Health Care and Economic Recovery
Should taxpayers continue shoveling money down the AIG "where taxpayer dollars go to die" black hole or should they have single payer health care?
We all know that AIG wins, but single payer health care would create 2 million jobs and increase public and business revenues by $317 billion. Those figures come from a California Nurse Association study and Black Agenda Report has the scoop.
Single payer health care, medicare for all, call it what you will, would save and create jobs and save many businesses. Yet it is off of the political table. We are left with saving the parasitic bankster class and the policy decisions that would really change the economic landscape are forbidden and kept in the attic like crazy relatives.
Too bad for us. We are just ass out as the saying goes. More good money after bad, instead of a true bail out.
Posted by Freedom Rider at 8:20:00 PM

He is right. Limbaugh looked like a Sopranos wannabe in that black shirt at the CPAC convention. He should be pitied and left alone.

What was the most important news story of the past week? Was it Rihanna and Chris Brown and whether or not they should get back together? Maybe the Rush Limbaugh hullabaloo kept you glued to the news. Or perhaps Michelle Obama's latest ensemble fits the bill for news worthiness. The correct answer is none of the above.

The biggest story of the week was the release of a Pew report which proves once and for all that the United States is the number one prison nation on earth. One in thirty-one Americans are behind bars, sentenced to probation or are on parole. The mass incarceration rate is directly tied to race of course. One in eleven black people are in jail, 1 in 27 Latinos and 1 in 45 whites.

One in 31: The Long Reach of American Corrections is a sobering study of the pernicious effects of incarceration which costs more than any other government program except medicaid. Incarceration costs states much needed revenue yet it thrives.

It thrives because it is racism perfected. What better way to keep black people in line after the civil rights movement gave us big ideas about being free? No Jim Crow, no problem. Just lock us up.

But black people won't speak up about this awful problem. We don't speak up for one simple reason. We are embarassed. We don't want to be connected with people who have broken the law. I don't defend law breaking, especially violent crime, but no one should be in jail for writing a bad check or failing to pay child support. Sentences for those infractions accomplish only one thing. They make sure that black people are always punished disproportionately and are kept under control.

Yet incarceration is not on the national agenda at all and the ascendancy of Barack Obama has only heightened the propensity for black people to ignore some of their brothers and sisters who are very hard to defend. Very few people are so hopelessly lost that their misbehaviour should only result in time behind bars. Most people can be rehabilitated into leading productive lives, but that has to be seen as a worth while goal.

It isn't seen as being a worthy goal because it would mean an end to racism, a system which is still so useful in maintaining the status quo and in keeping white people in line. White Americans haven't taken to the streets against bank bail outs or endless war because they still have a privileged position, however tenuous it may be.

One in thirty-one. Disgraceful.
Posted by Freedom Rider at 4:49:00 PM

Why We Must March Against Obomba

"With his speech today, President Obama has essentially agreed to continue the criminal occupation of Iraq indefinitely. He announced that there will be an occupation force of 50,000 U.S. troops in Iraq for at least three more years. President Obama used carefully chosen words to avoid a firm commitment to remove the 50,000 occupation troops, even after 2011.The war in Iraq was illegal. It was aggression. It was based on lies and false rationales. President Obama's speech today made Bush’s invasion sound like a liberating act and congratulated the troops for 'getting the job done.' More than a million Iraqis died and a cruel civil war was set into motion because of the foreign invasion. President Obama did not once criticize the invasion itself."
Answer Coalition

The video in the previous post is a picture that speaks 1,000 words. It shows just a small part of the reasons why we must continue to march against America's evil occupation of Iraq. The occupation is no less evil under Obama than it was under Bush. Occupation still kills and maims in Iraq or in Afghanistan.

The nature of occupation doesn't change. A democratic occupation is the same as a republican occupation. That is why we must march on Saturday, March 21st.

BTW, I know how the president's name is spelled.
Posted by Freedom Rider at 2:19:00 PM

The Evil Face of Occupation

This is it. This is occupation. The soldier in this video can be replaced or demoted or whatever, but occupation will look the same. That is what it looks like all the time. This is what Obama wants to continue. No change and nothing I want to believe in.

Is it just me, or does Newt Gingrich look like Lucifer? 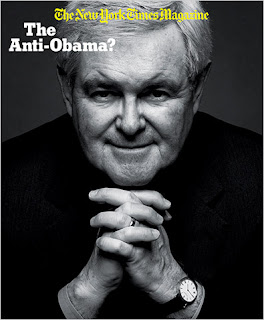 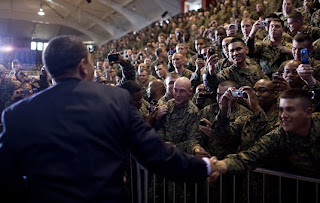 I Can't Wait to Kill or Be Killed

"No matter what the commander in chief says, I will follow."

"I am excited. I am serving my country. We have to fight back and take action."

"As a Marine, you have to be ready to go when the military says so. I am ready to serve wherever my country needs."
Posted by Freedom Rider at 5:55:00 PM