Laura, Is There Anything I Forgot to F_ _ k Up? 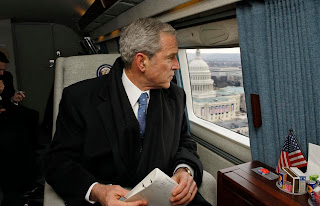 "President Obama is substituted in his official capacity as a defendant in this case."

Yes, you read correctly. The Obama administration has sided with Bush administration policy on warrantless wiretapping. According to Wired, Barack Obama is now making the same argument that George W. Bush did in a lawsuit against federal government. Bush asked a federal judge to stay an order requiring the release of classified documents in the case of al-Haramain v. Bush. It is now known as al-Haramain v. Obama.

So what exactly why was anyone getting the vapors last Tuesday? Change we can believe in? Now that Barack Obama is officially George W. Bush can we please stop the pretense. I guess those 2 million people who went to Washington feel like chumps.

How could they? The story probably won't make the papers and even if it did, Obama would be excused.

In a recent Black Agenda Report column I called him Black Reagan. He certainly is that. Obama has teflon to spare.
Posted by Freedom Rider at 6:46:00 PM

"States aren't moral agents. They don't have personalities or pet peeves. States represent the interests of those who rule them. And it's in the interest of our present rulers to reboot the American brand. Words like "morality" and "ideals" are smokescreens, blown in the faces of the public. Bush used the same words, but fewer and fewer people believed him. It was his own damn fault. A cheap failure in so many ways, Bush's recklessness made Obama's ascent not only possible, but inevitable. His actions weren't out of the mainstream of imperial thought, just riskier, crazier, more destructive. Bush's tactics were questioned, but not his crusade, which remains with us. His violence didn't seriously bother Democrats, as they continually helped finance it. So all this "new day" blather is utter bullshit. What's new is that we have a better, smoother bullshitter in office."

Dennis Perrin
Posted by Freedom Rider at 9:21:00 AM 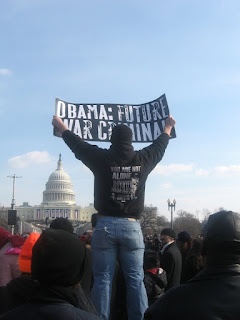 I was among the crush of humanity in Washington on Tuesday, January 20th. It was a strange place to be for an opponent of Barack Obama, the Democratic party, the Republican party, the military and prison industrial complexes, the Israeli lobby, and the Wall Street banksters, to name but a few.

Just when I wondered if anyone else knew they were witnessing dumbed down mass hysteria I turned and saw a brave/foolish soul protesting among the mostly zombified hordes. Adam Kokesh is a member of Iraq Veterans Against the War and a committed activist who I once heard speak at a peace forum here in New York. Adam stood atop a barricade and displayed a sign which read "Occupation is Still a Crime" on one side and "Obama: Future War Criminal" on the other.

Of course, American presidents always end up being war criminals at some point in their terms of office, but Obama was especially speedy. On Friday, just 72 hours after assuming the presidency, American attack drones killed 22 people in Pakistan. White House press secretary Robert Gibbs wouldn't respond to questions regarding the first pile of dead bodies created by the Obama administration.

"But Gibbs refused to answer the question by NBC News' Chuck Todd, saying, 'I'm not going to get into this matter.'

After Fox News' Major Garrett joined the slight fray that erupted over the non-answer, asking if he considered whether there was 'justifiable curiosity about the president's first military actions.'

'There are many things that you should be justifiably curious about,' Gibbs responded, perhaps taking a knock at Fox News in general, 'but I'm not gonna get into talking about this.'

'If other members of the US government are confirming this, why is it that you can't?' Todd wanted to know. 'I'm not going to get into these matters,' Gibbs said with a smile.

Afterward, other reporters went back to the economy and didn't press Gibbs for more details about what could be the first military operation conducted during the Obama Administration."

In less than one week, the Obama administration continues the Bush administration policy of carrying out military actions in Pakistan against the wishes of the Pakistani government, and the press can't be bothered to ask more than two or three questions about it. At least they are being consistent with the new president, showing the same degree of deference to him as they did to his predecessor.

I should point out that Adam received a mixed reaction from the crowd around him. Some looked on curiously, some took pictures. He was greeted by people who appeared to know him. There were surprised and angry reactions too.

One woman said, "That is an ugly sign." I felt compelled to speak up and said that the sign was beautiful. The woman responded that I should look at the other side, the "war criminal" side. I replied that it was indeed beautiful. Obama had publicly stated many times that he would continue warfare in Afghanistan, Pakistan and Iraq, which would result in deaths, which was certainly criminal.

I got into similar verbal scuffles on Adam's behalf. Actually I should say on democracy's behalf. There will be precious little of that when we have a president who is sitting in the cat bird seat with an idol worshipping population prostrate at his feet.

As I discussed in the previous post, my colleague Glen Ford, Executive Editor of Black Agenda Report, participated in an inauguration day panel discussing the new president's foreign policy.

Did anything significant happen in Washington on January 20, 2009? You betcha. Black Agenda Report was in the house with The Real News.

Watch and listen to our very own Glen Ford here, here and here. While millions of people swooned, wept and danced for joy for no earthly good reason, Glen and I told the truth and held nothing back for very good reasons. (Hopefully you can see my interview tomorrow).

As I point out in my column this week, the over the top celebration for Wall Street grand theft and endless war should not be seen as a defeat, but as a call for determined resistance. It is time to resurrect the dead language of movement politics and put it front and center. Celebrations for the status quo, even if they are carried out by millions of people, are no reason to give up. There are millions of people unimpressed with the barrage of media propaganda, people who are desperately trying to find kindred spirits who need to know that they exist.

January 20th was a day for celebration. It is day to celebrate the beginning of determined dissent and uncompromised truth telling.
Posted by Freedom Rider at 2:29:00 PM

Valerie Jarrett, Who Asked You

Soon to be President Pompous Ass and his patronizing tone are getting on my nerves and he hasn't even been inaugurated. First friend and senior adviser Valerie Jarrett is equally presumptuous, telling Americans when they should and shouldn't be upset.

“You do not need to have demonstrations in front of the White House to convince this president that there is a disparate impact in the African-American community around issues such as health care and education. He’s got that. The campaign stood for change. It stood for a grassroots, bottom-up drive toward a better country. That does not have to be confrontational. It can be engaging.”

Pardon me Val, but could you just STFU? It is up to citizens to decide that they should or should not demonstrate and yes, sweetie, presidents have to be confronted. Your smooth "don't worry your pretty little heads" talk does not intimidate me or millions of other people either. Only a fool would choose not to confront the powers that be, and my mother didn't raise one of those.

You know what Val, sometimes engagement doesn't work. Sometimes presidents and their advisers just don't give a damn and they have to hear to things they would rather ignore. So if you look out the White House window and see me or others demonstrating, you will just have to get over it.
Posted by Freedom Rider at 6:09:00 AM

Black Voters Did Not Pass Proposition 8

I said as much in Black Agenda Report on December 17. A widely reported CNN exit poll stated that 70% of black California voters supported the anti gay marriage proposition. The true figure is between 57% and 59%.

A report released this week by the National Gay and Lesbian Task Force Policy Institute reveals that Proposition 8 supporters were mostly older, over age 65, and regular church goers. It also states that the proposition was supported by every ethnic group to varying degrees. In other words, the argument in favor of gay marriage just didn't fly with enough people throughout the state. No one group can be blamed.

I hope that this data based conclucion will get the same degree of attention as the phony 70% figure.
Posted by Freedom Rider at 10:17:00 AM 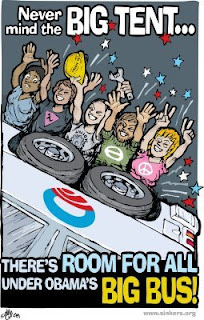 Under the Bus
Thanks to Mike Flugennock for the great image. This picture is worth 1,000 words.
Posted by Freedom Rider at 4:08:00 PM 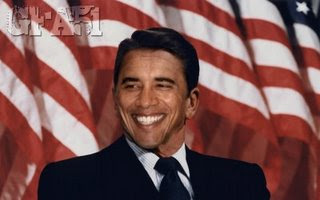 Black Reagan
“I am a little concerned by the way that Mr. Summers and others are going at this in that, to me, it still looks like a little more of this trickle-down, if we just put it in at the top, it’s going to trickle down. A number of people in there said, ‘Look, we have got to have programs that actually create jobs and put people to work.’ ” - Sen. Tom Harkin
Trickle down, trickle down, hmmm, sounds eerily familiar. Oh wait, it was Reagan, the last guy with serious teflon, the great communicator.
Don't say I didn't warn you. Obama hasn't even been inaugurated and he is already talking tax cuts and "reining in" medicare and social security. I was right but it is cold comfort.
Thanks to Guys from Area 51 for the image.
Posted by Freedom Rider at 3:29:00 PM