I had a great time speaking with host Suzie Dawson,
Cathy Vogan, Vivian Kubrick and Joe Lauria. Suzie starts out with
information about the status of the movement to free Julian Assange and some how to for those
who are already involved.

I'll cut to the chase. I start at about  2 hours 15 minutes. That's when it gets really good. If I may say so myself.

The fake resistance clutched their collective pearls when Rudy Giuliani said those words in defense of Donald Trump. But Giuliani was actually revealing the corruption conducted by prosecutors every day in this country. He was being truthful. Former CIA Director John Brennan, now loved by the McResistance, is the big liar these days. Read my latest column here.
Posted by Freedom Rider at 8:17:00 PM

On Monday, August 20 I was honored to join Dr. Edward Rhymes on his Blog Talk Radio program. We discussed my recent Black Agenda Report columns on Russiagate, the theft of the black American franchise, U.S. economic strangulation of Venezuela, and censorship of the left by corporate social media platforms. You can listen to our conversation here after an ad.

I have written posts about this event before and I'm going to do so again. On June 15, 2017 I moderated a panel discussion with Ray McGovern and Mark Crispin Miller at All Souls Unitarian Church in New York City. The talk was called Making News, Faking News and I urge you to watch it all at your leisure. It was a very illuminating evening for me and for everyone lucky enough to be there.

I was particularly struck by Mark's comments that begin at around 42 minutes and continue until about 47 minutes. I have transcribed most of his words here. I thought of his words again today as the corporate media felt compelled to create news where there is none.

"President Trump admits Don Jr.'s Trump tower meeting was to get info on Clinton" reads just one headline. This is not news. Not at all. Donald Trump Jr. received an email invitation to a 2016 meeting where he, his brother in law Jared Kushner and campaign aide Paul Manafort were promised "incriminating" information on Hillary Clinton from a Russian lawyer. He replied "...if it's what you say I love it." He later released the emails himself so this is definitely not new information.

The stupid Trumps lied for no reason when the intent of the meeting and Trump Jr.'s response were well known for the last year. When Trump, Sr. claimed not to know about that meeting no one believed him either because he is a relentlessly stupid liar.

Keep this in mind when reading Mark's words. Also keep in mind that the Democratic National Committee paid a former British MI6 agent, Christopher Steele, to get dirt on Trump and used it to get FISA court permission to spy on Trump aides. They did so without revealing the source of their information to the judge who approved the warrant to gather surveillance.

“Fake news is the horrible off spring of conspiracy theory. It has come to dominate many minds because of the rise of Donald Trump. Whose function has been, he has several functions, one of them has been to, I call him the deodorant in chief. Because he sanctifies the entire rest of the system. Because all of these people now think two things. They think that the CIA and FBI are on our side. “They believe in democracy. Thank God they’re there to protect us from Russia.” This is liberals now, this is liberals saying this.

And his other function has been to make people think that the New York Times and CNN and MSNBC and NPR tell the truth. And they have taken ferocious advantage of this delusion by constantly reminding us how dear to us they are because they tell us the truth, unlike Trump who is always lying.

Trump. Yeah he lies all the time. I mean If his lips are moving he is probably lying. But the lies that Trump tells are mostly trivial lies, stupid little lies. Like there was a terrorist attack in Sweden when there wasn’t one. Or he had you know 70 mill people at his inauguration when he obviously didn’t. I could go on. …

Far more dangerous than any of his flagrant and trivial idiotic lies are the whoppers that have been successfully put across by the corporate press and the left liberal press in many cases such as Putin invaded Ukraine right, such as there are moderate rebels in Syria’s “civil war” and we are protecting the Syrian people from this dictator who’s massacring all of them. Right. Those are dangerous lies. Russia hacked the election is a dangerous lie because it is war propaganda. That’s what it is. It is war propaganda.

Now I have to say this having studied the media for decades. Having grown up in the country and having absorbed what the media pumps out since I was a child I have never seen a moment like the present. I have never seen a time when the delusion is so total where the lies are so dangerous and where contradicting them is so intensely reviled and this all the doing of liberals. That’s what’s unusual about this. That’s what makes this so different from the first Red Scare not the first Red Scare but the one after WWII when it was mostly troglodyte right wingers and demented Birchers and so on.

Now its democrats and some progressives and its not just the corporate press as I say it’s the left liberal press as well.  And it’s not just the left liberal press and the corporate press but its our premier comedians. It's Stephen Colbert it’s Bill Maher its Saturday Night Live which if that’s not a propaganda instrument for the deep state or whatever you want to call it I don’t know what one is. Because they’ve done frequent bits vilifying Putin and Russians generally they’ve done parodies of Dilma Rousseff. It is non stop State Department propaganda coming from our most important weekly comedy revue show. You find stuff like this on house of cards where Pussy Riot play themselves. There’s a kind of evil Putin character who fits directly in the New York Times version and so on and the propaganda juggernaut even includes Amnesty International and Human Rights Watch.

So what we’re talking about is an enormously successful inescapable propaganda machine that must have Dr. Goebbels grinning ear to ear in his birth in hell because it has actually managed to determine the furnishings of countless minds of our fellow citizens. I fear to disastrous effect.

As Ray McGovern says the only real salvation that we really have is online. It’s in those websites that have somehow managed to maintain a certain amount of journalistic integrity and it’s in the young people who now have a tremendous amount of facility with the internet and have discovered that you can find the other side of the story in seconds. I take great hope from that and I hope that you can share that hope with me. Thank you.”
Posted by Freedom Rider at 10:09:00 PM 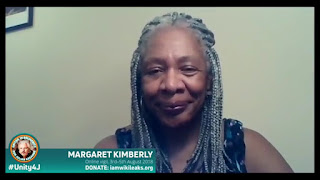 "We (Black Agenda Report) have to support Julian Assange and others like him."

I was invited to participate in a 50 hour online Vigil for Julian Assange. The Ecuadorean government recently said that he will have to leave its London embassy. He is in grave danger of being arrested by the U.S. government as soon as that happens.

You can see my comments here. The online vigil lasts until midnight, eastern time, on Monday, August 6th. You can see all of the #Unity4J online vigil interviews here.
Posted by Freedom Rider at 8:05:00 AM