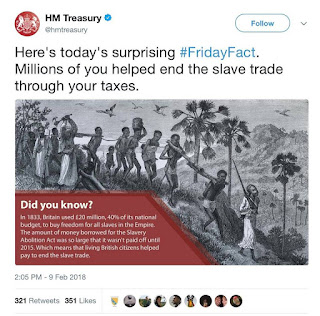 The United Kingdom of Great Britain and Northern Ireland committed numerous genocides and wars of aggression over many centuries. The British role in the trans Atlantic slave trade and the existence of its Caribbean economies are some of the worst crimes against humanity ever committed.

We must keep this in mind as the scandalous treatment of Caribbean migrants is exposed. The events surrounding the so-called Windrush generation are part and parcel of that criminality. It was the subject of my latest column in this week's Black Agenda Report. Please read it here.
Posted by Freedom Rider at 4:54:00 PM

I was asked to comment on the annual State Department report on human rights around the world. The United States has a dreadful human rights record but it always escapes notice. China and others point out the hypocrisy of the U.S. daring to criticize others in this regard. I'm grateful to Presstv for inviting me once again.
Posted by Freedom Rider at 3:59:00 PM

I had a great conversation with Solomon Comissiong of Your World News. We discussed the propaganda which makes the case for the continued war of aggression against the Syrian people. I also wrote about this issue in my most recent Black Agenda Report column, Syria and Press Propaganda.
Posted by Freedom Rider at 6:28:00 AM


"The American press does a more efficient job of propagandizing its people than RT could ever do because RT's connection to the Russian government is explicit. It is Russia Today. It is like Voice of America or BBC. We know about the state connection. What makes the American propaganda so much more compelling and persuasive to countless Americans especially the best educated ones is the myth that we have a free press and that there is no connection between the state and these corporate outlets."
Mark Crispin Miller


I had the pleasure of meeting Mark Crispin Miller when I joined him and Ray McGovern on the panel Making News, Faking News last year. He is a professor of media studies at New York University and is always worth listening to. Miller appeared on RT yesterday and
made very important points. Please watch.

Last night Donald Trump announced that the United States, France and Britain carried out missile strikes against Syria. I was asked to comment on Presstv Iran. They were having audio and video problems but you can hear and eventually see me. You can hear me for about the first minute. I return at 5:00 minutes until about 9:00 minutes audio and video.

This week I covered the stories of Yaser Murtaja and Marie Colvin in my Black Agenda Report column. Yaser Murtaja was a Palestinian journalist who was clearly identified as such when Israeli Defense Forces (IDF) shot and killed him. Marie Colvin was an American reporter embedded with the Free Syrian Army in 2012 when she was killed by missile fire. Her family filed a $300 million lawsuit against the Syrian government claiming that she was deliberately targeted.

One person is minimized and eventually erased while the other is elevated. One is inconvenient and the other presents an opportunity for war propaganda. I also discussed with Don DeBar on CPR News. 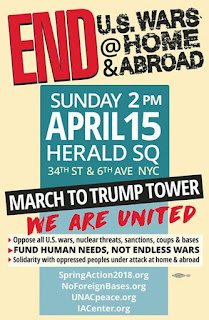 No war on Syria! Or anywhere else for that matter. There are actions across the country this weekend. Find them on the Spring Action 2018 website. Join me in New York City on Sunday, April 15.

I was honored when Joe Lauria, the new Editor in Chief of Consortium News, asked me to write about Dr. Martin Luther King, Jr. on the 50th anniversary of his assassination. In King's Legacy Betrayed I point out a very sad truth.

Black people in this country are worse off, by every measure, than we were in 1968. We have fewer living wage jobs, a 700% increase in the prison population, the destruction of the social welfare state and the resurgence of United States imperialism. All of these setbacks were deliberate and were intended to undermine the gains of the liberation struggle.