Georgetown University owes black people millions of dollars. That is what I say my column in this week's Black Agenda Report. In 1838 the Jesuit school that became Georgetown held 272 enslaved people and sold them in order to ensure that institution's survival. Now they must pay up. I discussed the issue with Don DeBar on CPR News.
Posted by Freedom Rider at 2:09:00 PM

Here is my latest discussion with Don DeBar at Community Public Radio. We talked about my latest Black Agenda Report column. I noted that the Obama justice department quickly issued a directive intended to protect the rights of transgender public school students. The DOJ has shown no such urgency about addressing legal rights or rather the lack thereof for black people. I start at about 6 minutes into the program.
Posted by Freedom Rider at 5:17:00 PM


I serve on the Administrative Committee of the United National Antiwar Coalition (UNAC). UNAC is sponsoring three panels at Left Forum 2016 taking place in New York City May 20 - May 22. Please join us. Thanks. 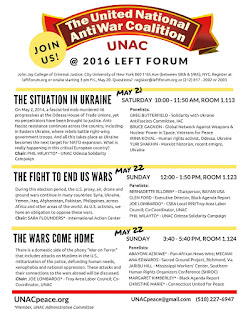 Today I spoke to Don DeBar on Community Public Radio news. The first few minutes has reports on the right wing ouster of Brazilian president Dilma Rousseff and the U.S. unilateral withdrawal from missile treaty with Russia. I start at about 12 minutes to discuss my latest Black Agenda Report column. What should Bernie Sanders supporters do if Hillary Clinton wins the nomination? Simple. Don't vote for her. They have a chance to be the revolutionaries they claimed to be. They can end the ruse of democrats posing as progressives.

All About Money on KMEC

I talked about foreign policy, the election, and the military draft we ought to bring back on the program All About Money on KMEC.
.
Posted by Freedom Rider at 4:02:00 PM

My thanks to Craig Gordon of Now Age Press. We had a great conversation on United States foreign policy with Russia, American imperialism and the propaganda that promotes it.
Posted by Freedom Rider at 3:45:00 PM

Today I spoke with Don DeBar on Community Public Radio news. Intro at 2:30, I start speaking at 3:45. I discussed my latest Black Agenda Report column, Obama's Last Gasp Imperialism.
Posted by Freedom Rider at 11:14:00 AM