As I said in Black Agenda Report recently, Nigeria is a sea of corruption because of the crookedness of Andrew Young and others. Read it here.
Posted by Freedom Rider at 9:56:00 PM

". . . when Palestinians do engage in nonviolent protest, and are subjected to brutal repression as a result, how come the mainstream U.S. media don’t pay any attention?"
Common Dreams

The Palestinians can't win. Even when they and their supporters practice non-violence they can be killed and the American media won't report it at all.

If Mairead Maguire or any other Nobel peace prize winner was shot by soldiers from any country other than Israel, their would be a nation wide out cry. Of course, you can't cry out when you don't know what is happening. That is the whole point of shutting out inconvenient information.

"It is impossible to run for president without repeating every lying utterance of the Israel lobby. It is Israel that has the bomb, not Iran.

Hillary and Obama will say nothing about this disgraceful, ugly display. McCain will get a pass from them and from the media when in fact he is no better than the Virginia Tech gunman. Cho came by his murderous rage through pure insanity. McCain would kill on an even larger scale and make it all sound good and reasonable.

Once again we see the awful hypocrisy that is killing this nation. We recoil when individuals kill but sing songs to encourage government killing, which is always the most lethal. No terrorist group in history has ever killed on the scale of a government.

The Don Imus debacle just gets worse. For years he has been the biggest purveyor of racist hate speech on the air waves. He is also very powerful, so even prominent liberals like Frank Rich will bow and scrape in order to stay in the very lucrative Imus circle.

After describing the Rutgers University women’s basketball team as “nappy headed ho’s” he first apologized and then had a two hour long come to Jesus meeting on Al Sharpton’s radio show. He was still slapped with a two week suspension. Clearly his bosses were not amused by his comments and were not impressed with his contrition. Thank God for small favors.

Now the truth is coming out. Don Imus is popular because he is so hateful. Like Howard Stern, he has a large white, male audience because he gets away with making the racist, misogynistic statements they wish they could get away with saying. It is at the very least impolite to call anyone a “ho” or to talk about a former first couple as “Bill Clinton and his fat ugly wife, Satan.”

Now the apologists are coming out of the wood work and some of them are black. Congressman Keith Ellison says that black people should think of "redemption and reconciliation" if Imus is truly contrite. Gwen Ifill, host of Washington Week on PBS, was herself a victim of Imus’ bigotry when he called her a “cleaning lady.” She criticized Imus, but in a strangely detached way. In a New York Times op-ed she asked, "Why do my journalistic colleagues appear on Mr. Imus’s program? That’s for them to defend, and others to argue about."

Ifill knows the real deal. Don’t complain too much about powerful white men. They can do what they want, including insult and offend, with impunity. Why shouldn't she ask about her colleagues who sully themselves to suck up to this misogynistic bigot? Ifill certainly knows her bread is buttered with the corporate media and that she had better not step out of line if she wants the spread to stay on the loaf.

Here is a good rule for everyone to follow. Don't trust anyone who apologizes for Imus. They are all believers in white male supremacy, whether they admit it or not. James Carville, Paul Begala, John McCain, and Rudy Giuliani are all guilty. So is Frank Rich if he returns to the Imus fold.

Unfortunately, the Rutgers team has decided to meet with Imus. I see no reason why the subjects of his hatred should help dig him out of the hole he dug for himself. Of course they are being lionized for their decision, but that is to be expected. Black people are always told to forgive mistreatment. It is time for someone to say enough already. Imus should not be allowed to have a kumbyah moment with the objects of his scorn.

He believes in his ugly words. He shouldn't be allowed to pretend he doesn't. It is time for him to go and it is time for everyone of every race to say good riddance.
Posted by Freedom Rider at 12:14:00 PM

A Little Time Off

I'm going to take the rest of Holy Week off. No posting unless the news is really big, in which case you will have heard about it some where else.

Right wingers have their pants in a twist because Rosie O'Donnelle questions the official 9/11 story and said it was "an inside job." They even say she should be fired.

Wrong. Rosie should have been fired for making fun of Asians with her "ching chong ching chong" routine. The right wing only care about subservience to their point of view. Racist jokes are no biggie. Not only did she offend many people but her so-called apology was anything but and just as offensive as her original comments.

BTW, if O'Donnell is going to delve into 9/11 conspiracy theories, she should stick with the only one worth mentioning, that Israel knew about the terror plot. Even an outspoken "liberal" won't touch that one.
Posted by Freedom Rider at 3:56:00 PM

Many thanks to Counter Punch and Alternet for linking to my Black Agenda Report column.
Posted by Freedom Rider at 3:36:00 PM 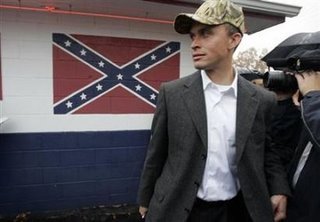 Harold Ford is Still a Joke

"We must finally emerge from the Jim Crow mentality that celebrated every Black grasp for the golden ring, no matter how loathsome the grasper." - Black Agenda Report

Progressives around the nation should have heaved a sigh of relief when Harold Ford lost his U.S. Senate race last year. The Senate went Democratic without him, but he is so dangerous that it would have been better for him to lose even if the Republicans had remained in the majority. One Joe Lieberman is enough.

But like a bad penny, Ford keeps showing up. First, God-awful Clintonite James Carville publicly used Ford to attempt a coup against Howard Dean, head of the Democratic National Committee (DNC). Howard Dean was the architect of the Democratic victory, but he isn't a Clintonite, so Carville stabbed him in the back. Mind you, past and future Clinton strategist Terry McAuliffe never won anything when he headed the DNC, yet Carville never uttered a peep against him when he got his butt kicked every November.

Now Ford is the new Chairman of the Democratic Leadership Council (DLC) and he is as duplicitous, two-faced and stupid as ever. Yes, I said stupid. Ford would be a nobody if white liberals didn't get the vapors every time they laid eyes on a black ivy leaguer. He has always been nothing but a light weight and a rank oppportunist, and being an opportunist in the Democratic party means heading right.

Like all other idiots Ford goes out of his way to prove his stupidity. Today he blogged at the Talking Points Memo Cafe and made himself look more foolish than ever. In his nonsensical tome, "In Search of Common Ground," Ford told progressives to stop being mean to him and his establishment friends. It could have been boiled down to "Just shut up."

Ford told those of us who ignore his utterances what he has been up to lately. (Sometimes ignorance is bliss). He recently gave a speech on what he thinks the Democratic party should be doing. Here is his silly agenda.
(1) Keeping America Safe; (2) Giving Americans the Tools to Compete; (3) Holding Government Accountable for Results; (3) Creating the Hybrid Energy Economy; (5) Making America the Most Pro-Family Country on Earth; and (6) Ending Poverty For All Who Work

Oh, and no mention of poor people who don't have jobs. If your out of work, screw you. Ford isn't even smart enough to talk about raising employment. Just in case anyone was confused, he made it clear that poor people will not be discussed while he is around.

So there you have it. Ford is a lying dog and he isn't even very smart. That means he will run for office again. Democrats should make it clear that he won't be welcomed.
Posted by Freedom Rider at 3:51:00 PM