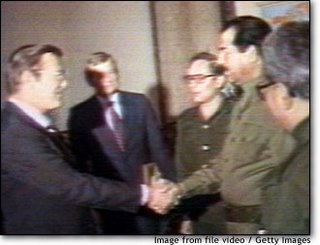 Colin Powell's Pants are on Fire

Colin Powell, the ultimate political survivor, is back in the news. In response to recent suggestions that troop levels in Iraq should be increased, he replied that the U.S. army is "about broken."

No one should thank Powell for telling us what has been obvious for a long time. Any ideas of increasing the numbers of troops in Iraq are pure fantasy, unless of course the Bushies go along with Congressman Charles Rangel's proposal to bring back the draft.

As Powell attempts to resurrect himself from the ashes of the Bush team, he should be asked these questions again and again. He lied and those lies had horrific consequences. Maybe Husseini can do us all a favor and clone himself. Any puncturing of the American bubble of ignorance is a good thing.
Posted by Freedom Rider at 2:03:00 PM 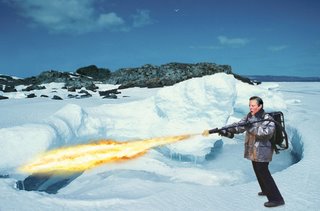 At long last the New York Times (registration required) has decided to mention that former president Jimmy Carter has written a new book that is on the Times bestseller list. For some strange reason, the only mention is in the Arts section and only the book's critics are quoted.

The book, Palestine: Peace Not Apartheid, has gotten little attention in the print media. The American media routinely ignore or excoriate critics of Israeli government policy. It is a little harder to do if the critic is a former president and prolific author. So the Times finally covers a book that deals with a critical national and foreign policy issue but only in the Arts section.

Carter has done the American people a great service by writing this book and by adamantly and unapologetically using the word apartheid. My two cents is in this weeks Black Agenda Report.
Posted by Freedom Rider at 11:12:00 AM

"Threatening a lawsuit, I feel, violates the Jewish principle known in Hebrew as Kiddush HaShem, interpreted in the Talmud, part of ancient Jewish wisdom, as an action that encourages people to admire Jews. One need only read the comments on the Internet following the news accounts of the tree removal, to know that most people are feeling indignant and hurt. They certainly are not feeling more warmly toward Jews as a result of this mess."
Rabbi Daniel Lapin

Lapin hits the nail on the head. When Rabbi Elazar Bogomilsky threatened to sue Seattle's airport if they didn't add a menorah to its holiday display, he in effect asked for the Christmas trees to be removed. As Lapin said, ". . . when one throws a punch (which is what bringing a lawyer and threatening to sue is equivalent to) and one gets decked in return, one cannot plead that one didn’t intend that outcome."

Sea-Tac airport should have told the litigious clergyman, "See you in court," and waited for a judge to instruct them on how to respond. Instead they took the wimpy way out and caused great resentment among Christians, whose opinions apparently don't count for much.

Because of vociferous complaints, the trees are back up, but what will happen next December? I don't really care if there is a menorah at Sea-Tac, but knowing how it came to be there will leave a bad taste in my mouth.

" . . .'the underlying cause of strife and bloodshed in the Middle East, namely the state known as Israel, [should] be totally and peacefully dissolved'. "
Rabbi Aharon Cohen

Yes, there are anti-Zionist Jews. They are such anti-Zionists that they will show up in Iran and participate in President Ahmedinajad's Holocaust Conference. They don't question that the Jewish holocaust took place, but that it has been used as a "tool of commercial, military and media power". Ouch! Sounds like they read The Holocaust Industry by Norman Finkelstein. If you haven't read this or other Finkelstein works, you should.

Of course, I don't deny that the Jewish holocaust happened, I do deny that it gives Israel the right to commit a holocaust against the people of Iran. Unfortunately, inviting David Duke to a conference is not a way to win friends or influence people. It makes it easy for stupid and/or blood thirsty Americans to advocate killing.
Posted by Freedom Rider at 8:30:00 PM

Hallelujah! Praise the Lord! Fundies are busting out of the closet. This article appeared in today's New York Times, but I have linked to the International Herald Tribune because there is no registration required.

The article tells us what we already knew, that gay people follow every religious, political and ideological belief system on earth. The individuals profiled in this story don't believe that the earth is 4 billion years old. They take the bible literally, except for what it says about them.

Hopefully, they will become more open minded in their religious world view too. If they don't believe what the bible says about homosexuality, they should consider that humans evolved and that the earth is older than the bible says it is.
Posted by Freedom Rider at 7:49:00 PM

The title sounds like a group of college kids studying for a test, but it is far more serious. Today Bush's baby sitter, James Baker, essentially said that occupying Iraq was a very bad idea.

Occupying Iraq was morally wrong and without justification. More than 600,000 people are dead and the rest of world hates America more than ever.

The Study Group proposals don't really amount to much. A plan for withdrawal is the only way to save lives. A plan to compensate the Iraqi people for their suffering is the only moral thing to do.

By the way, the American media has said little about what the Iraqis want. CNN actually took a step towards behaving like a news organization when it reported that Iraqis say, "Get the hell out of our country." Only 1 out of 20 believe that security is better now than under Saddam Hussein, 9 out of 10 are afraid of American troops and 2 out of 3 will feel better when U.S. troops get out. Too bad the press isn't hanging on to their every word. It is the only opinion that ought to count.
Posted by Freedom Rider at 3:42:00 PM

"But there‘s no doubt that within the Occupied Territories—Palestinian land—that there is a horrendous example of apartheid. The occupation of Palestinian land, the confiscation of that land that doesn‘t belong to Israel, the building of settlements on it, the colonization of that land, and then the connection of those isolated but multiple settlements—more than 200 of them—with each other by highways, on which Palestinians can‘t travel and quite often where Palestinians cannot even cross."
Jimmy Carter

When a former president of the United States writes a book, it gets attention. Well, not if the book criticizes Israel. Jimmy Carter's latest work, Palestine: Peace Not Apartheid, has received no attention from the national print media. The New York Times, Washington Post, USA Today, Wall Street Journal and Los Angeles Times have all ignored the book.

The Israeli government was one of the few governments on earth that advocated for the occupation of Iraq. It is the only other nation on earth that wants nuclear war against Iran. Unless full and open debate about Israeli policies are permitted to take place, this country will suffer. If New York or another city is attacked it will be because of hatred of America's unqualified support of Israel.
Posted by Freedom Rider at 9:25:00 PM