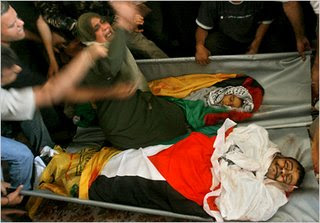 When I saw this photo in today's paper I immediately noticed that a child had been killed. For the second time in the past week Israel has killed Palestinian civilians. The first group of dead included seven members of one family. Now they have killed again, claiming to target a missile maker. Hmmm. The goal is to spread terror and let no one forget who has the power to kill.
Posted by Freedom Rider at 4:55:00 PM