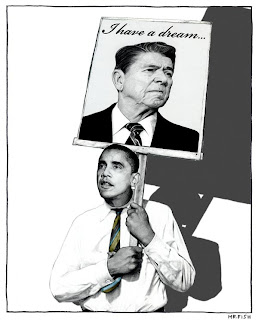 Where to begin? David Souter announced his resignation from the Supreme Court. Sounds good to have a republican appointee retiring during a democratic administration, but all is not what it seems.

"I will seek somebody who is dedicated to the rule of law, who honors our constitutional traditions, who respects the integrity of the judicial process and the appropriate limits of the judicial role. I will seek somebody who shares my respect for constitutional values on which this nation was founded, and who brings a thoughtful understanding of how to apply them in our time.

As I make this decision, I intend to consult with members of both parties across the political spectrum."

Well, f_ _ k me. I'm sorry to have dropped the old F bomb twice in one day, but I have had enough. When we speak out against the democratic party we are always told to remember the power of judicial appointments. It is terribly important for a democratic president to be able to put his stamp on the judiciary.

OK, if that is the only great thing about a democratic president, why should I be happy that he is planning to consult republicans about his choice? Obama has a 68% approval rating and the republican party has a paltry 21% approval rating. If he can't fight for a liberal on the court what the hell can he fight for?

Limits on the judicial role? What does that mean? It sounds very right wing to me, but then again so does Obama.

Sorry, but we would be no worse off if John McCain were president. No I wouldn't want to look at him and Cindy, who if they did live in the White House would be living together for the first time in years, but let's stick to substance shall we.

The United States government is openly undermining the elected president of Pakistan, a man was sentenced to five years in prison for broadcasting Hezbollah, AIPAC spies got off scot free, and Bush policy on Guantanamo continued seemlessly. The Employee Free Choice Act is declared dead on arrival, thanks to democratic senators who also killed "cram down" legislation that would have allowed renegotiated mortgage agreements in case of bankruptcy.

Well, Arthur Silber is posting again, so there was one bright spot after all.
Posted by Freedom Rider at 8:03:00 PM