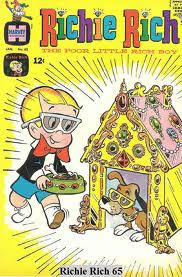 Barack Obama certainly knows where his bread is buttered. The path to political power begins with rich people, and getting and keeping their approval.

On Thursday night Obama spoke at a $30,000 per person Democratic National Committee fundraiser in Greenwich, Connnecticut. The event was held at the home of Richard and Ellen Richman. Yes, that's right, their last name is Richman. What irony.

At any rate, not only did the president tell his well heeled audience why they should keep writing checks, but he decided to take the opportunity to beat up progressives.

"Now, the second reason I'm telling you this is because Democrats, just congenitally, tend to get -- to see the glass as half empty. (Laughter.) If we get an historic health care bill passed -- oh, well, the public option wasn't there. If you get the financial reform bill passed -- then, well, I don't know about this particularly derivatives rule, I'm not sure that I'm satisfied with that. And gosh, we haven't yet brought about world peace and -- (laughter.) I thought that was going to happen quicker. (Laughter.) You know who you are. (Laughter.)"

The odds were against any pesky progressives being present in the $30k per plate crowd, but why pass up a chance to reassure the check bundlers? Of course Obama would hang out with Richie Richman and make fun of people who have the nerve to make political demands. The Richmans of the world demand such behavior from anyone who wants to climb the political greased pole.

As for people who want world peace, we have sense enough to know that the democrats can't give it to us. That is why we have already dumped the democrats and know that we can't rely on electoral politics to produce change that will bring peace, justice and a sustainable planet.

No need to feel offended. Yes, we know who we are and we know that the democrats are not only not the answer for change, but that they are as much a part of the problem as the reviled republicans. More on that in my next post.

Hat tip to Glenn Greenwald
Posted by Freedom Rider at 10:10:00 AM