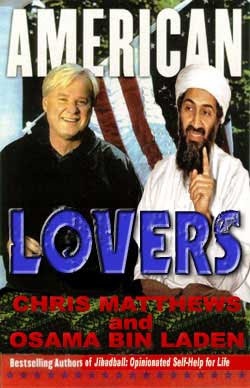 Chris Matthews, host of MSNBC's Hardball, is a very lucky man. He is an idiot who nonetheless hosts a political talk show that is seen around the country. He claims to be a Democrat but constantly proclaims his love for George W. Bush. He recently declared that only the "wackos" dislike Bush.

Matthews most recent buffoonery was the result of bin Laden's latest message. Bin Laden knows what everyone else outside of the U.S. knows, namely that Halliburton and its ilk have made billions of dollars on the occupation of Iraq. When bin Laden stated what is now common knowledge, Matthews nonsense went into over drive.

Matthews said that bin Laden sounded like Michael Moore, as if Moore had some top secret information. Moore has a better sense of humor than I do. He used comedy to skewer Matthews. Well, Moore has given us a good laugh. Enjoy.
Posted by Freedom Rider at 9:40:00 PM