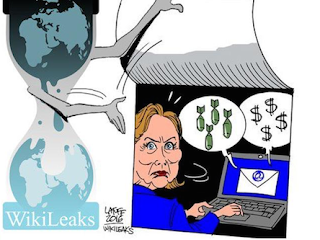 I love Wikileaks. Everyone should. If it weren't for Wikileaks we wouldn't have seen the horrors of the American occupation in Iraq. On a less important note they provided proof that Henry Louis Gates is a complete suck-up who lies to maintain his position as the official go-to spokesnegro. But I digress.

Last week Wikileaks released a trove of 19,000 emails hacked from the Democratic National Committee (DNC). These emails proved that the democratic party is nothing but a marketing machine used to convey an appearance of diversity and inclusivity. It works alongside the republicans to do the bidding of the ruling classes and wins elections by convincing its constituencies that they will work in their interests. They seldom do but that is part of the confidence game.

In my Black Agenda Report column I dissect why there is a bizarre effort to blame Vladimir Putin for the hack. They are desperate to deflect attention from the fact that they raise funds only for presidential candidates and leave local races bereft of funds. Of course this helps republicans but that is part of the act. Democrats claim they can't do what their supporters want because the Koch brothers have taken over state legislatures.

Even though Hillary Clinton had huge advantages over Bernie Sanders they trolled his supporters, disparaged his religious beliefs, and colluded with corporate media. While democrats continue to claim that Donald Trump is a fascist they actually fit that description.