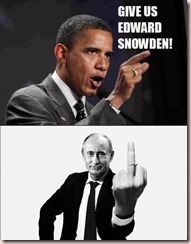 “So consider what has happened: we have a sitting President who is treating a journalist as a personal threat and is going to extreme lengths to stymie him providing testimony to Congress. That of course has not deterred Greenwald. One of the points of the testimony Wednesday (technically, not a hearing) was for Greenwald to rebut statements made by Obama, James Clapper, and Keith Alexander that the NSA programs were limited…” Naked Capitalism

At last. Edward Snowden left the Moscow airport today after being forced to take sanctuary there for the past five weeks. Russia gave him temporary asylum and allowed him to enter the country. The former defense contractor employee fled first to Hong Kong and was then en route to a third country when the Obama administration cancelled his passport as he landed in Moscow.

Liberal Obamabots wrung their hands and scolded Snowden for seeking refuge in evil Russia. They never bothered to point out that Snowden sought asylum in over 20 countries but was thwarted by American government interference. Absent the Obama temper tantrum he might have ended up someplace that liberals found more acceptable.

This news is huge. Vladimir Putin directed a very public rebuke to Barack Obama who was very ham handed in his appeals to the Russian president. Kerry, Carney and every member of the senate and house fumed and fussed. They called Snowden a traitor and all used the finger in the eye metaphor straight out of the Three Stooges. It was all for naught. Putin was already angry about Syria and about being made a fool of over the Libya security council vote. He also refused to give in on Russian law, which has no extradition agreement with the United States.

It isn’t coincidental that Russia made its decision official two days after Bradley Manning was convicted of espionage. The Manning case proved that Snowden had a well founded fear of persecution, which is the international standard for the granting of asylum.

Obama had gone to great lengths to get Snowden and to silence his critics. Glenn Greenwald, the journalist who broke the Snowden story was scheduled to give testimony to congress on the NSA. Congress had narrowly defeated a bill meant to defund the NSA’s ability to gather and store information on our phone calls. The double whammy of Greenwald speaking directly to congress was too much for the president to handle  says Firedoglake.

President Obama has historically considered the Hill some lower bardo of hell.  One of the major complaints of congressional Democrats has always been that the President does not consult them or include them in shaping his legislative agenda, let alone stop by for a chin wag.

So imagine everyone’s surprise when the President suddenly announced he was coming to the Hill today to meet with all the Democrats –  right before the August recess begins.

Coincidentally, this forced Alan Grayson to cancel the hearing on NSA activity scheduled for today, at which the Guardian’s Glenn Greenwald was to testify. Grayson’s bipartisan hearing was organized to give critics of the NSA’s sweeping surveillance programs a chance to air their concerns, and stem the tide of “constant misleading information” coming from the intelligence community, per Grayson.

Those who saw Glenn Greenwald on ABC’s This Week last Sunday heard him hint at reporting he would publish this week which would directly contradict claims made by General Keith Alexander, James Clapper and President Obama himself about the limited nature of the NSA’s programs (video above).

DSWright has more on XKeyscore, the NSA program Greenwald reports on today.  Suffice to say the Guardian publishes copies of training manuals that teach analysts how to search nearly “everything a user does on the internet.”  Of all the revelations made by Edward Snowden so far, these are by far the most explosive — and they directly contradict statements by the President that the NSA’s surveillance activities are limited to metadata.

Sadly, Grayson’s hearing has to be pushed into September because of the President’s sudden desire to drop by for a cuppa.  Coincidence?  Only those in the White House would know for sure.

I’ll say it. It was no coincidence at all. But it doesn’t matter. The U.S. can’t always succeed in telling the rest of the world what to do.