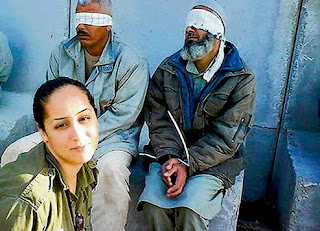 "The best time in my life"

Eden Abergil is an ordinary young Israeli. She completed her military service in the occupied territories and went on with her life.

She was so nostalgic about her days as an occupier that she posted photos of herself on her Facebook page. The photos of Eden depicted Palestinians bound and blind folded with the smiling young soldier seated beside them.

Thanks to Breaking the Silence, a group dedicated to exposing the violence of the occupation, Abergil’s photos were made public. Abergil removed the photos after an international outcry, too late for the cyber world, but whines and pouts that she has been mistreated. “I still don’t understand what’s wrong.”

As far as we know, Abergil didn’t pose for pictures with dead bodies. Apparently that is quite common among IDF soldiers.