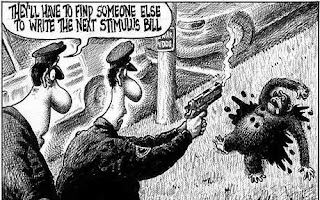 The Real Deal About Obama and the New York Post
I have been boycotting the New York Post for a long time, and so have thousands of other people too. I am put off by its open racism and love of the American empire. Its obvious right wing tilt and freak show headlines keep many readers away, in droves. It has bled red ink for years in its circulation battle with the Daily News, but because the News Corporation wants to keep its print foothold in New York, it continues to subsidize the losing operation.
The Post only costs 25 cents, the only way the paper managed to increase circulation. That price gives me no incentive to change my ways. I am proud to say that I wouldn't purchase the Post if it only cost a penny. So great is my antipathy that I won't even pick up a discarded copy to read the sports or television sections.
The Post is now involved in a new controversy of its own making. Last week the president signed the stimulus bill and a pet chimpanzee mauled and nearly killed a Connecticut woman. The chimp was later shot to death by police.
Enter the Post with the editorial cartoon shown above. The Post claims there was no intent to mock or caricature Obama personally, to compare him to a chimp or to support an assassination. Many people are still outraged, and with justification. No newspaper should even imply support for a presidential shooting.
However, the outrage expressed over the cartoon is misguided in many ways. Last year the New York Post endorsed Barack Obama over Hillary Clinton in the New York presidential primary. The endorsement was tepid at best, it was in fact more of an anti-Clinton screed than an expression of support for Obama.
Yet the fact that the Post chose Obama over Clinton should have raised the alarm in the progressive community. It was one of many opportunities for progressives to question Obama before supporting him. The New York Post wouldn't endorse any democratic who was good for the country.
But Obama supporters said nothing, in fact they were happy. The Post is no more racist today than it was one year ago, but Obamaites were glad when their guy got another leg up against Hillary Clinton, even if that leg came from Rupert Murdoch.
Why picket the Post offices only over this cartoon when the Post always calls for Israel and the United States to kill thousands of people whenever and wherever they choose? Every call for death and profits its met with ghoulish happiness in Murdochland.
When Obama attacks Iran, and the Post waxes enthusiastic, will anyone protest? I already know the answer. They won't protest at the Post or at the White House either. The Post didn't suddenly become ugly because of the chimp cartoon and it will still be ugly even if it apologizes for this latest example of right wing racism.
American militarism is ugly and racist too, but no one cares about that anymore because of the color of the current oval office occupant. So by all means protest at the Post, but don't stop with the chimp cartoon. And when the time calls for it, protest Obama too.
Posted by Freedom Rider at 3:25:00 PM