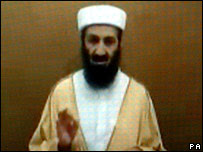 Fake Bin Laden Video
No copy of the video had appeared on Islamic Web sites as of yesterday, as has been the norm for past al-Qaeda videos. A spokesman for SITE declined to comment on how it obtained the most recent video. - Winter Patriot

Maybe he did get a nose job and dye his hair, moustache and beard. Or maybe it is all a fake. It is strange that a right wing group, SITE, got this video before anyone else.

They are only cited on National Review Online, or Fox News, and one of the partners has been hand picked by Bush to man lots of posts on Homeland Security and other Bush organizations.