Mehlman Outed from Closet and Job

Yesterday Republican National Committee Chairman,Ken Mehlman, announced that he is stepping down. Not coincidentally, they day before that Bill Maher announced on Larry King Live that Mehlman is gay.

CNN censored those comments from the rebroadcast program. Thank God it is Larry King Live. Maher had already done his duty as a citizen before the corporate media could shut him up.

Will that same corporate media dare ask Mehlman what everyone else is asking? Did he leave as quickly as he did because he would be asked if Maher spoke the truth?

Mehlman's homosexuality has been an open secret for a long time. I often wondered if the gay prostitute (2/15/05 post) in the White House press room was his special friend. We will never know the truth of that either.

It has come to this. Stand up comics are now doing the work of the press.

I admit it, I'm parphrasing. Although I'm not off by much. Israel keeps killing Palestinians in Gaza. Eighteen women and children were killed by IDF shells yesterday. Olmert can call their deaths a "technical error" if he wants, but that isn't how the rest of the world sees it.

Israeli soldiers shot and killed two Palestinian women last week. The women were part of group acting as human shields. They were helping men holed up in a mosque escape from the soldiers. The men had guns and they were shooting, but they didn't kill any Israelis. The women, the ones who got shot, were unarmed.

By the way, every shot fired, every shell that falls, has Uncle Sam's name on it. Israel insists on putting a bulls eye on every American's back. 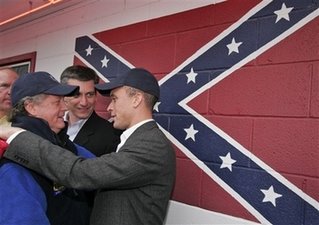 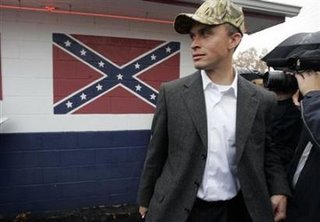 I predicted this would happen in my Black Agenda Report column entitled, How to Steal an Election. It is clear that voter ID requirements are preventing eligible voters from casting their ballots. So much so, that very well known white people are having problems voting too.

Robin Carnahan is Missouri's Secretary of State. She is the official in charge of that state's voting regulations. Her father was Governor and her mother was a Senator. As you can see from her official photo she is very, very white. The last point was probably the only thing that allowed her to vote by absentee ballot last week.

A Missouri law mandating photo ID was struck down by a federal court, but a poll worker insisted that Carnahan could not submit her absentee ballot without an ID. Carnahan persisted and was eventually allowed to vote without photo identification. "To have that experience personally was very troubling," said Carnahan. Now there is an under statement.

Steve Chabot is an Ohio Republican Congressman. He submitted his driver's license as ID but it displays his office address and not the home address listed on the rolls. The Congressman was forced to return home to retrieve additional identification.

Unlike Carnahan, Chabot didn't complain. "I guess this just shows the poll workers are really doing their job." Actually the incident showed just the opposite. As a state of Ohio website clearly states, "You may also use your Ohio driver's license or Ohio photo ID, even if it shows a previous address."

If well known very white people are having trouble at the polls, what hope do poor people have who don't have the luxury of time or the wherewithal to argue or the positive assumptions that come with having white skin. If the results tomorrow show another Republican victory, don't be surprised. Remember you heard it here first. 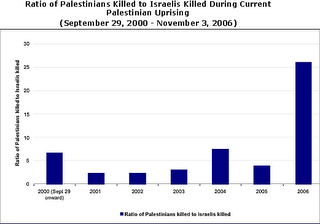 Here is a nice little factoid to think about as the week begins. As you can see on the chart above, there have been 76 Palestinians deaths for every Israeli death since July 1. It is a slaughter, not a conflict.

"I offer a deep tissue and swedish style massage with the pleasure of the man in mind. If you like a strong muscle man to bring pleasure to you then please call me." - Mike Jones, drug dealing prostitute and friend to down low, right wing, evangelicals

Imagine Mike Jones' surprise. The sex worker was in a gym, watching tv when he saw a regular customer on the tube. It turned out that the man he knew as "Art" was in fact Rev. Ted Haggard, pastor of New Life Church in Colorado Springs and president of the National Association of Evangelicals. What did Jones say to himself at the moment? "Hey, I get high with that guy and I lick his balls!" Well, something to that effect.

Preacher Ted Haggard is the latest closeted conservative in the hot seat. When Jones first claimed to have both had sex with and used methamphetamines with Haggard, Haggard called him a liar. He said he didn't know him at all. Period. End of story.

Well, that version of events lasted for about one day. Everything changed when Jones produced taped voice mail messages left by Haggard. Not only did they talk, but they talked about buying methamphetamines. Finally Haggard cracked and owned up to knowing Jones, getting a massage from him, and buying meth from him, but only to throw it away and not use it. The New Life Church was as unconvinced as everyone else and fired Haggard, who now cops to being a "deceiver and a liar."

I first lost any inclination to be compassionate towards Haggard when gave an interview in his car with the wife and kiddies by his side. A reporter asked him if he would step out so they could talk in private, but the lying deceiver had clearly lost any vestige of common sense decision making and dug himself in deeper with his family in tow.

Jones did the public a great service when he revealed Haggard's hypocrisy. I admit to not knowing anything about the guybefore the scandal, but a 2005 Harper's article is an eye opening and frightening revelation about the evangelical movement.

"In America the descendants of the Protestants, the Puritan descendants, we want to create a better future, and our speakers say that sort of thing. But with the influx of people from Mexico, they don't tend to be the ones that go to universities and become our research-and-development people. And so in that way I see a little clash of civilizations.”

“I teach a strong ideology of the use of power,” he says, “of military might, as a public service.”

Haggard is a pro-war fascist cult leader. He spreads hate and promotes American wars of aggression. I hope he won't be missed, but the sickness that gave him followers will not disappear. In the fine American tradition of religious hucksterism, he will be followed by others who are equally vile.

I have been seriously remiss in not mentioning last week's debut of Black Agenda Report, of which I am a columnist and editor. BAR will tell you what the corporate media will not. While they carry water for the GOP and make John Kerry's lame remarks a front page story, BAR will tell you how to keep an eye on Congress, even in Dems are back in control, and the history of an American genocide.

In this week's issue, my column covers the ever present threat of election theft by the Republicans. National elections were stolen in 2000, 2002 and 2004. Don't be surprised if polls showing Democratic victories are once again mysteriously wrong.

Whatever the outcome, Black Agenda Report will explain it all for you.