Cheney Keeps Raking in the Cash

According to New Jersey Senator Frank Lautenberg, Dick Cheney's Halliburton stock options have risen 3,281% in value in the past year.

Remember that figure the next time you hear that we must "stay the course." The only reason to stay the course is to make sure that Halliburton, Bechtel and the other merchants of death can keep making money.

Is being Governor of California less exciting than being a movie star? Perhaps the constitutional requirement that president's be American born is making it all a big drag. Well, whatever the reason, Arnie may be going back to the movies. There are reports that he may sign for roles in Terminator 4 and True Lies 2.

I have to admit that I liked the Terminator franchise. Of course, now that I know Arnold is a misogynistic, Hitler loving, racist, I am less inclined to fork over cash to watch him on the big screen.

Fascism Watch and the Bird Flu

The World Health Organization has decided not to estimate how many victims might succumb in an avian flu pandemic. They finally admitted they can't give an estimate, but we should assume it would be a hell of a lot of people.

In case of a bird flu outbreak, President Bush says that he would have to call in the troops, here on U.S. soil, to keep us all safe. Somehow the thought doesn't make me feel any safer.

As I pointed out in a post on August 10, 2005, the Defense Department is coming up with a plan, CONPLAN, to be exact, that would take control from civilian authorities and give it to the military in case of a terror attack.

If you aren't scared you should be. Any proposal that gives the military further control over our lives ought to protested and vehemently opposed. The deafening silence you hear is the result of inertia, ignorance and post 9/11 propaganda. We have been told so often that we must choose between having civil liberties or being safe that most of us go along like sheep and accept atrocities like the Patriot Act. Our leaders did. Only one Senator, Russ Feingold, voted no.

Let's hope that a few others have gathered the courage they lacked after 9/11 and vociferously oppose the impositon of military control over our lives.

I try not to look at Bush too often. The sight of him is bad for my mental health. Perhaps I need to check him out from time to time and observe him more closely. He appears to have developed an odd twitch in his jaw. Is he sick? Is he medicated? Is he drunk? We will never know, but look for yourself here.

Katrina Victims Still Need Help, the Red Cross Does Not

The Red Cross expects to raise more than $2 billion before Hurricane Katrina-related giving subsides. If it takes care of 300,000 people, that's $7,000 per victim. I doubt each victim under Red Cross care will see more than a doughnut, an interview with a social worker and a short-term voucher for a cheap motel, with a few miscellaneous items such as clothes and cooking pots thrown in.
Richard Walden, Operation USA

Katrina victims still need help and they still aren't getting it from FEMA or from the Red Cross. As I said on September 3rd, the Red Cross is a bad choice for relief funds. Its pre-existing contracts with state and local governments provide enough money for the little that is does. When private donors give more it just ends up in the Red Cross coffers.

SOS After Katrina is a much better organization. It is community based 501c3. Your donations are tax deductible. SOS provided food and supplies when FEMA and the Red Cross were missing in action. 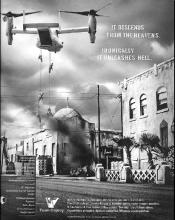 End the occupation. We won't have to worry about Bell, Boeing or ill conceived ads.