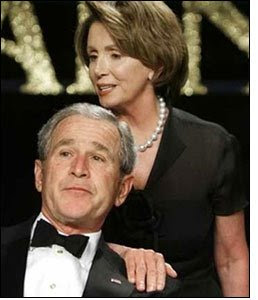 Nancy Pelosi
I never liked her. I called her an enemy in my Black Agenda Report column back in 2007. Except for predicting that Hillary Clinton would be the democratic presidential nominee, I stand by every other statement I made. I have been proven correct in my assessments of the house speaker and the rest of the worthless democratic leadership.
"Disappointment in the Democrats, pleas to "grow a spine"miss the point entirely. Pelosi and her clique have no interest in Democracy.They go through the flimsiest pretense of opposing Bush when they have nointerest in doing so. Her goal is to preserve the status quo, not to overturn it. Nancy Pelosi now has stated publicly what she thinks ofus, the citizens of this country. We are an irritant to be tolerated, notpeople with rights that must be respected. Pelosi is an omen, a warning thatacceptance of Democrat party actions is the first step on the road to politicalhell."
Al Schumann at Stop Me Before I Vote Again hits the nail squarely on the head in assessing Pelosi and the not so new revelations that she knew all about torture yet said and did nothing about it.
"Moreover, Pelosi's position is nothing like that of a torture victim's. She can bring the wingnuts up short whenever she feels like it. The very worst that will happen to her is she'll lose office and become a hideously wealthy lobbyist. She is certainly not going to be tied hand and foot, smeared with feces, beaten and left to lie on a chilled floor until she goes mad. It's not in the cards. Not remotely. She's not going to be put in full body restraints and force fed. Nor does she face water boarding. She's not going to be tortured. It's grandiose hysterics to even make the comparison. She could put a stop to their media antics, herself, at any time by demanding a full, independent investigation.
Even in the most generous interpretation of her actions, Pelosi is the worst kind of politician. She lacked the street smarts to cope with experts in plausible deniability. She leapt into the role of useful idiot. She lacked the sense of self-preservation, never mind integrity, to sound an alarm once it was clear she'd been set up as a patsy. She was stupidly eager to collude with vicious thugs, and now she's paying the smallest possible price for it. She's an accessory to crimes against humanity, she walked into the role with her eyes wide open, and she shows no signs of remorse. Worse, I'll bet she gets reelected easily. She's perfectly representative of her defenders."
Ouch!
Posted by Freedom Rider at 5:04:00 PM