Harold Ford Jr. Is Worse Than I Thought 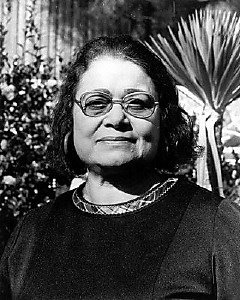 I have no use for Ford, none whatsoever. He is a political prostitute, publicly expressing his love for George Bush and supporting an end to social security.

Now we know that he is willing to lie about his own grand mother for political gain. Ford Sr. and now Harold Ford Jr., claim that family matriarch Vera Ford, pictured above, was white.

Sorry. That is not the photograph of a white woman. Fortunately, at least one of her descendants is honest. Barbara Ford Branch is quite adamant that her mother was a black woman and is calling out her own nephew. Good for her.

Ford Sr. and Jr. are asking us to believe that a white person would pass for black in an era when to put it mildly, there was no incentive to do so. Hmmm. I suppose anything is possible, but Ford has proven that the legal theory is true. Liar in one thing, liar in all.
Posted by Freedom Rider at 1:03:00 PM