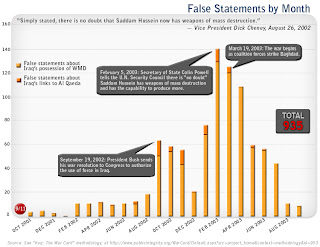 935 Lies
"Simply stated, there is no doubt that Saddam Hussein now has weapons of mass destruction."
Vice President Dick Cheney, August 26, 2002
That was a whopping big lie. It was just one of 935 made by Bush, Cheney, Rice, Powell, Rumsfeld, Wolfowitz and other administration officials between September 11, 2001 and the invasion of Iraq in 2003.
The Center for Public Integrity and the Fund for Independence in Journalism have compiled a report, Iraq: the War Card, Orchestrated Deception on the Path to War, which compiles all of the lies the administration used to make a case for war. The report even has a handy chart for those of you who need something more visual.
The report makes the case for impeachment, it makes the case for war crimes trials. Neither of those things will take place. The Democrats won't fight for the constitution, the rule of law, or the laws of the God. Most of the world views the American people the way they view Germans in the 1930s. They wonder why we have said nothing as our nation continues to commit crimes against humanity. The American people are themselves condemned by the actions of the Bush regime.
Posted by Freedom Rider at 10:58:00 AM